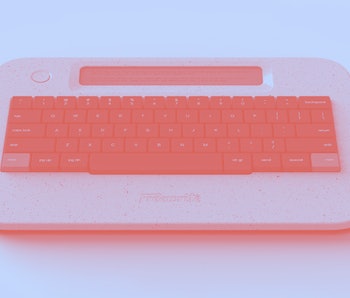 Distraction-free writing tools are an admittedly niche category, but Astrohaus’ next device is at least paying homage to a cult favorite. The Freewrite Alpha, announced on August 28, appears to be directly inspired by the Alphasmart, a “smart keyboard” that was discontinued in the early 2000’s that’s since become a favorite of writers who value its affordability and simplicity.

The Alpha — Freewrite’s new device seems to be cornering the same market — arguably it’s been doing that for a while with its E Ink smart typewriters — by being simple and easy to write on. The Alpha is focused on word processing and free of distractions: no apps and the internet connection is only for syncing documents. At “less than 2 lbs.,” according to Astrohaus, it’s also lighter than a fair number of laptops.

Interestingly, the device abandons the company’s favored E Ink technology for a “reflective monochromatic FTSN LCD” that’s also reminiscent of the original AlphaSmart. That change shouldn’t affect the battery life, though, Astrohaus says the Freewrite Alpha is supposed to get up to 100 hours on its rechargeable 4,200 mAh battery. It’s also rechargeable over USB-C when the battery runs out.

All told, it’s a far more minimalistic product than Astrohaus’ previous work, eschewing turn-of-the-century author aesthetics for what’s basically a keyboard with a kickstand and LCD display glued on top. What more do you really need, right?

Remake? Revival? Something else? — An odd element of the Freewrite Alpha announcement is how much it does, or doesn’t, connect to the device it’s clearly referencing. Astrohaus is using the “alpasmart.com” domain name, which last sold products in 2013 and has hosted a landing page announcing the device was being discontinued and absolutely nothing until earlier this year.

An international education tech company called Renaissance has maintained the AlphaSmart brand since it acquired the company in 2005, taking advantage of the popularity of the device in schools. It’s only offered software support since its Neo and Neo 2 AlphaSmarts were discontinued, and it’s not entirely clear if it's involved at all with this new product, or if at some point it just sold off the domain name. My guess would be the latter.

Input has reached out to Renaissance for comment and will update if we hear more.

Availability — Currently, you can reserve the Freewrite Alpha for $1 ahead of its launch on Indiegogo. Astrohaus plans on selling the device for $349, which will make it the cheapest option in the company’s lineup, a title currently held by the $499 clamshell Freewrite Traveller. Customers who reserve an Alpha now can also lock in a lower $249 price and early access to the crowdfunding campaign.

Input has reached out to Astrohaus about its Indiegogo campaign and will update this article if we learn more.

Obviously, the lack of details here and the general uncertain nature of crowdfunding projects is worth some caution if you are interested in getting a Freewrite Alpha. Astrohaus has obviously successfully released similar hardware of its own, but nothing’s easy during the pandemic. In the meantime, you can still find used AlphaSmarts available for purchase for under $100.