Ford is building an EV 'mega campus' in Tennessee 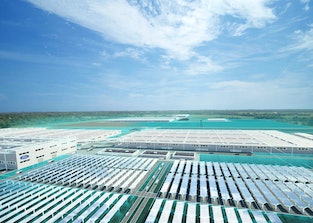 How much Ford and SK are investing in new EV-focused facilities.

Ford is partnering with South Korea’s SK Innovation (which is also making batteries for new Hyundai models) to build a gigantic EV and battery production facility called “Blue Oval City” just outside of Memphis, Tennesse, and two battery-focused, smaller sites in Glendale, Kentucky. The value of the deal is $11.4 billion, and the Tennesse plant and one of the Kentucky ones are expected to come online in 2025, with the third set to follow in 2026.

The company says the most important part of successfully making EVs is controlling the cost of their batteries (Elon Musk agrees), and the easiest way to do that is through vertical integration — getting components close to battery manufacturing facilities, and getting those facilities close to the production lines building the final vehicles.

Ford is contributing $7 billion dollars, with SK footing the bill for the remaining $4.4 billion. According to Ford, it’s the largest single investment the company has made in manufacturing since its founding, and the move will create 11,000 new jobs.

Seeking to close the loop — Ford says it’s trying to “reimagine” how electric cars, trucks, SUVs and the batteries each category of vehicle requires are both made and recycled. Part of the new facilities will be dedicated to handling end-of-life EV batteries, disassembling them, and trying to reuse as many of their constituent parts as possible. To achieve closed-loop battery manufacturing, Ford is partnering with a company called Redwood Materials.

In addition to further reducing costs, recycling and re-use also forms part of Ford’s sustainability goals. The company has said it wants to meet Paris Accord targets for complete carbon neutrality by the stated 2050 target, if not before.

Massive increase to capacity — The new batteries that come out of Kentucky and Tennesse will power both Ford and Lincoln vehicles, and Ford says the facilities will collectively produce 129 gigawatts of battery capacity annually (43 gigawatts at each of the three new plants), or enough to power a million vehicles.

Ford didn’t make any new product announcements, but did talk about the demand for its Mach-E beating even it’s most optimistic estimates, the strength of pre-orders for the F-150 Lightning (pre-production models of which are currently leaving its EV testing center in the company’s hometown of Dearborn, Michigan), and reaffirmed its intention to launch an E-Transit van in 2022. It said the new facilities will also be instrumental in future electrified F series vehicles.