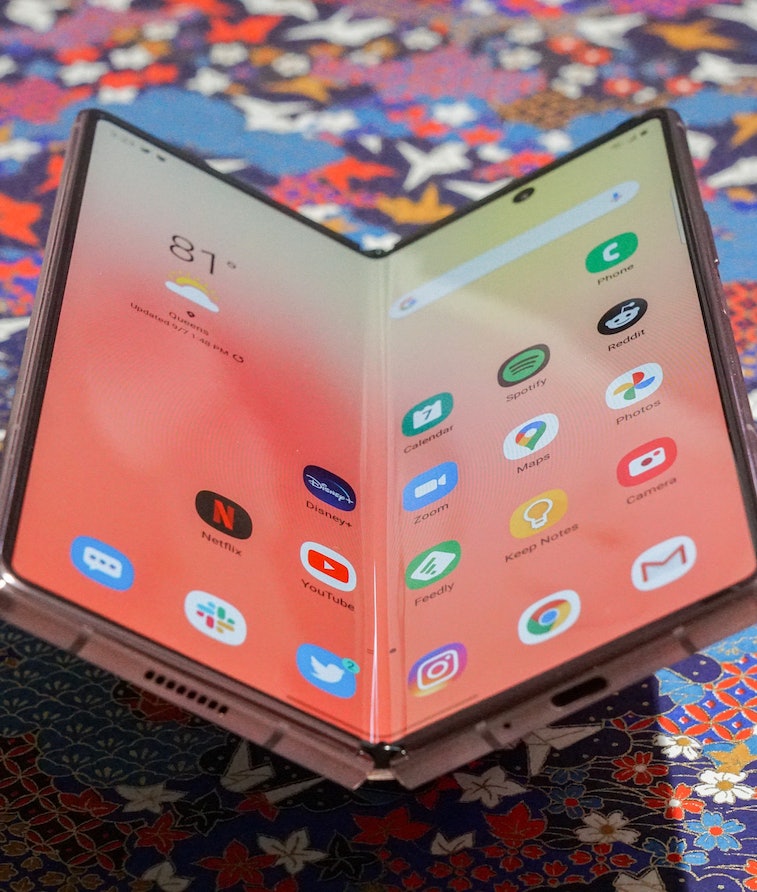 Apple and LG Display are reportedly collaborating on a folding OLED screen for future devices, according to The Elec.

The news of the partnership is buried in a separate report about HP’s own plans for a 17-inch folding notebook-style product, but as 9to5Mac rightly notes, the partnership adds even more credence to previous rumors that Apple is developing a foldable.

Questions remain, though: Given how finicky folding displays currently are, would Apple really release a product that uses one? And, does anyone want a folding MacBook or iPad in the first place?

A hybrid device — There have been burbles here and there of Apple dipping its toe into foldables throughout the past few months of 2022. This February, Ross Young, CEO and analyst at Display Supply Chain Consultants, claimed Apple was working on a 20-inch foldable and the company could possibly launch the device in 2026.

The company could go with a foldable 20-inch screen attached to a physical keyboard or just have one side of the display serving as a virtual keyboard. I’m told Apple has indeed been exploring a dual-screen, foldable MacBook/iPad hybrid that would take the second approach.

Gurman says Apple’s been working with folding screen prototypes for the last few years but seemed uncertain whether it would ever see the light of day. Plenty of prototypes never become consumer-ready products. The same goes for patents — just because Apple has patents for folding display hinges doesn’t mean it’ll ever actually use them.

The Elec’s report doesn’t really get into too much detail about what Apple and LG might be planning but does share that “The panel is being designed for tablets and notebooks with ultra-thin glass as the cover window instead of polyimide.”

Analyst Ming-Chi Kuo believes some kind of foldable is still in the cards for Apple, likely starting with a larger-sized device like an iPad, before turning to a foldable iPhone.

No one seems super bullish on Apple using folding displays — 2025 and 2026 are years often given for other unlikely Apple products, like the long-rumored Apple Car — but more noise is definitely being made of it as of late. And I have to say, I’m listening.

Having used Oppo’s Find N foldable, I understand the skepticism. Even with display improvements, a crease in the middle of your screen is a hard thing to get over. The necessary quirks of today’s foldables seem decidedly inelegant and un-Apple, whether it’s the pre-applied screen protectors covering up fragile, super-thin glass or the rubber-sealed hinges keeping dust out of vulnerable internals.

I still think there’s a place for folding screens, maybe not as the ultimate replacement for your tablet and phone, but as a third option for people with different needs or use-cases. And Apple’s direct competition seems to agree. Samsung’s released three generations of foldables so far, and the Galaxy Z Fold 3 and Galaxy Z Flip 3 are undeniably interesting phones that are enjoyable to use.

Samsung believes its commitment to the form factor is paying dividends too. Just last year, the company claimed, “in the first month since launch, the Galaxy Z Fold 3 and Z Flip 3 exceeded total accumulative sales of Samsung foldable devices in 2020.” That’s a vague fact that clearly hasn’t translated to true mainstream appeal yet, but Samsung still thinks foldable shipments can “grow tenfold” by 2023. Ambitious, but not entirely impossible.

Companies are diving into folding displays in sizes closer to Apple’s rumored prototypes too. Lenovo’s Thinkpad X1 Fold was far from perfect as a first-generation product — reviews back this up — but it cleared the way for even bigger devices like the ZenBook 17 Fold OLED Asus showed off at CES 2022. It’s my belief that none of these products have to be “great” for foldable computers, tablets, or smartphones to take off. They just need to be common enough that a folding screen becomes a form factor people expect.

Apple never intended to make big iPhones. In fact, Steve Jobs believed no one would buy big phones because “you can't get your hand around [them].” But Samsung and other Android manufacturers proved they were popular, and slowly the iPhone grew, leading to the introduction of the Plus line and later multiple generations of the iPhone Pro Max.

The company (specifically, Jobs) took a similar stance towards offering a stylus for the iPad. But the technology improved and customers wanted it, so the company made the Apple Pencil. Apple has principles and strong opinions about how people should use their computers. But it won’t pass up an opportunity to offer a better version of an idea — and an opportunity to make more money — when existing products start to get stale.

Apple traditionally steps into a product category late, with a slightly more polished (and expensive) take, sealing the deal and making sure a form factor sticks around for the long term. Samsung, Lenovo, and Asus are making foldables and their quirks normal, and even Google is rumored to be working on a foldable Pixel. The juggernaut that is Apple could just be the company to make them broadly desirable.

Maybe the rumors and reports are just hot air. A trillion-dollar company certainly has the resources to experiment with all sorts of products that it never intends to release. Like an AR / VR headset or an electric car, it shows Apple is interested in buzzy “new” product categories.

But it seems like the general belief of the tech industry is that you can’t just sell the same laptops, tablets, and smartphones forever. You need to carve out a space for something new to make investors and customers salivate. For Meta, it’s pipe dreams like “the metaverse”. For hardware manufacturers like Apple, it’s new form factors and bigger screens. Right now that seems to mean folding screens. (Though, to be fair, Apple also hasn’t followed trends like adding touchscreens or 360-degree hinges to laptops, no matter how badly consumers want them.)

Until some new feature becomes the hot new thing, I don’t think it’s unreasonable to believe Apple could be positioning itself to release a foldable. I think it’s just practical.