Zuckerberg says Facebook doesn't care about "offending" people anymore. Did it ever?

“[Facebook’s goal] isn’t to be liked, but to be understood.” 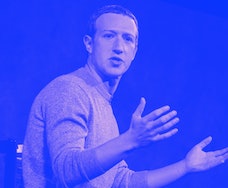 In a generally bleak earnings call with investors this week, Facebook boss Mark Zuckerberg said the company is now more interested in users understanding its decisions than necessarily approving of them. Zuckerberg says this wasn’t the case in the early days of the company, where consumer attitudes were more important. But that’s what happens when you own a sector: what people think stops mattering as long as your share price keeps climbing (it was down in after hours trading, by the way).

On the call, Zuckerberg had this to say: "One critique of our approach for much of the last decade was that because we wanted to be liked, we didn't always communicate our views as clearly because we were worried about offending people." He added that the company's goal, "Isn't to be liked, but to be understood." In other words, a license to be awful.

Still growing despite controversies — You’d think that the Cambridge Analytica debacle (and subsequent fines from the Federal Trade Commission and Brazil’s government), the $550 million settlement for a class-action lawsuit in Illinois, allowing politicians to outright lie in ads (even while rival Twitter has chosen to ban political ads entirely), misleading ads about anti-HIV drugs, reports about nefariously tracking users, reckless storage of user data, or any of the myriad other scandals Facebook has faced would at least slow its growth, but you’d be wrong.

Despite doing its best to out-evil Google, Facebook grew its user base by 8 percent to 2.5 billion last year, while revenue for the last quarter of 2019 increased 25 percent year-on-year.

But shareholders worry about the future — Shares in Facebook did drop 7 percent after Wednesday’s results announcement, but that’s likely because investors don’t have a clear idea of how the company is going to continue to deliver the outsized growth they’ve come to expect. It’s yet to monetize WhatsApp, risks alienating Instagram users if its plans to turn the image-sharing app into an e-commerce tool make it unpalatable, and its plans to launch a cryptocurrency called Libra have been variously met with anger, derision and horror.

While Google has progressively pivoted ever further away from focusing on its users’ interests to those of its shareholders instead, it’s unclear if Facebook’s ever really cared about its users at all. Even Twitter boss Jack Dorsey is distancing himself from the Zuck. Perhaps the rest of us should follow suit? Because dwindling user numbers may well be the only way to make ourselves understood, even if it probably won’t make us liked.