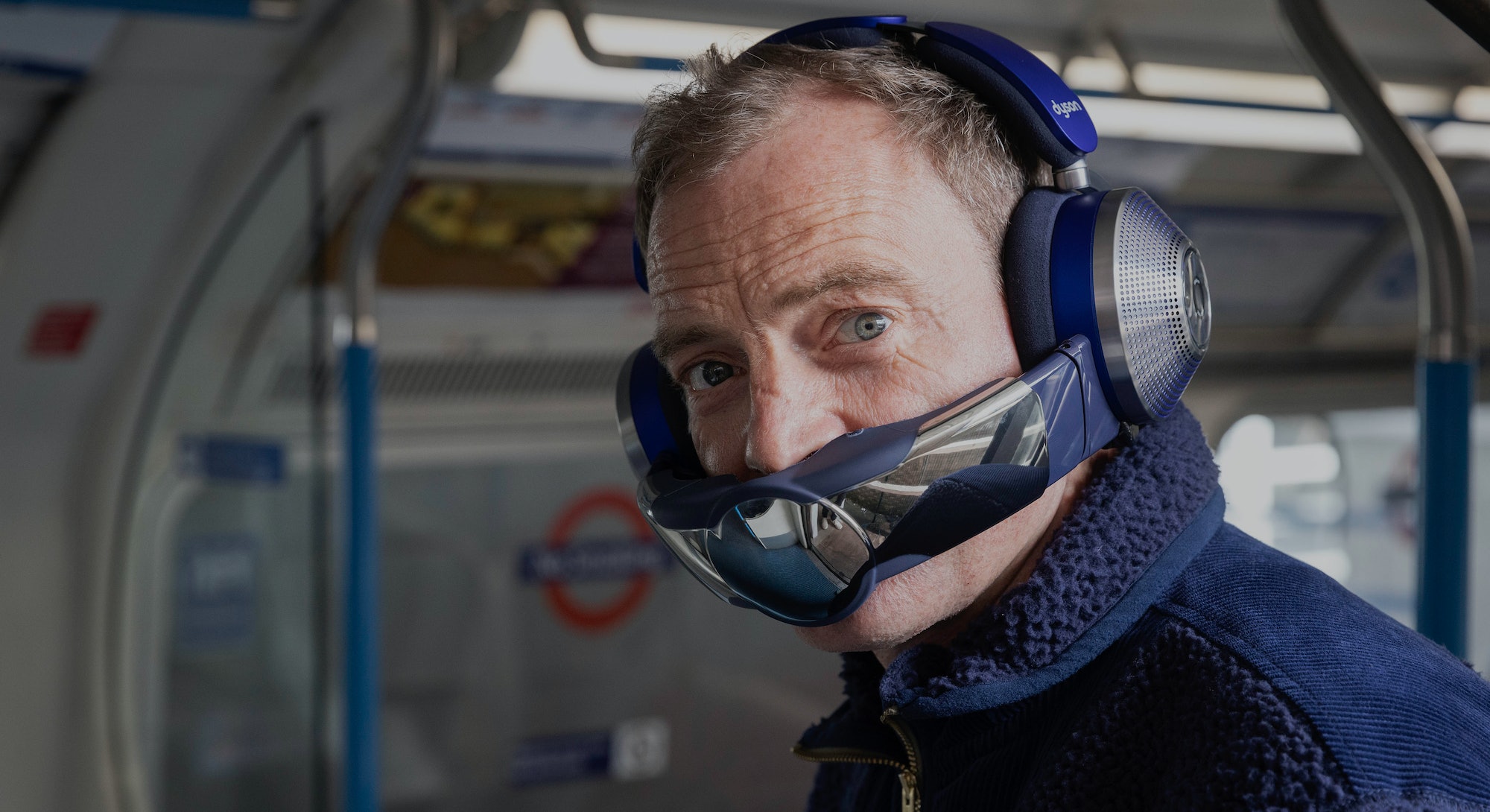 When Dyson invited me to a hotel in Manhattan, New York, I was expecting a new blaster-shaped cordless vacuum.

Then, I saw the product — about the size of a round birthday cake — sitting on a table underneath a gray cloth and changed my guess to a refreshed version of Dyson's 360 Eye robot vacuum.

I could not have predicted the company's next product would be the Dyson Zone, a pair of Bluetooth headphones with a removable visor that clips into the earcups via magnets and shoots small jets of air through its motors to purify the wearer's mouth and nose region.

The Zone, as Dyson engineering manager Vicky Gibson-Robinson told me, has been in development for the past six years and is not a product in response to COVID; the wearable aims to combat both noise and air pollution — there's nothing about the air purification system that protects against airborne viruses such as COVID. Gibson-Robinson personally worked on the Zone for over half her career at Dyson.

It looks absolutely wild. Dyson knows this. Gibson-Robinson was not offended by my shock, gasps, and awe. After hearing the story behind the Zone, the problems it's designed to solve, and then getting a few minutes to try a functional prototype, I walked out of the hotel more intrigued, but not as baffled by its existence or its seemingly dystopian design.

There is no doubt the Zone is a Dyson product — people will call it overengineered like they do all of Dyson's products, but it's undeniably futuristic and purposeful. Noise and air pollution is a very real problem in major cities around the globe and only getting worse as populations skyrocket and urbanization increases. The Zone's design may seem absolutely ridiculous, but so too did the image of people wearing face masks two years ago. As always, Dyson's next-gen product, which is launching this fall, tries to solve problems that are not yet too concerning but could be in the next few decades.

"If you try and tackle both sound and air pollution at kind of a city or global level to try and bring them down, that's going to take forever," says Gibson-Robinson. "So, the space that Dyson has always been in is, let's let people control their own environment."

On a basic level, the Zone functions as regular active noise-cancellation headphones. They're larger than your average pair of Beats, Sony WH-1000XM4, or Bose QC 45 — the ear cups need to be larger to fit the powerful motors that drive the air purification system — but the over-ear headphones are much lighter and comfier than they look in photos. The ear cushions are soft and the headband is plenty flexible to conform to all head sizes.

I listened to a few songs paired up to an iPhone and the sound quality seemed solid — clear mids, bright highs, and deep lows. Of course, the Zone I tried was a prototype and the sound tuning is still a work in progress so anything could change before shipping. But the sound didn't at all feel like an afterthought. Like many headphones, the Zone has several ANC modes, including Isolation, which turns the noise cancellation up to full blast; Conversation, which turns off the air purification when you pull the visor down; and Transparency which is an ambient mode that lets you hear both your music and surroundings like you would on AirPods Max.

The sound didn't at all feel like an afterthought.

"Large, angled ear cushions mold around the listener’s ear, with a foam density and headband clamp force engineered specifically for both comfort and optimal noise reduction," is how Dyson describes the Zone in a press release. The headband shape and bendability are inspired by a horse saddle; the foam materials were deliberately chosen for maximum breathability and comfort.

Gibson-Robinson told me that Dyson made tons of prototypes with different head shapes and sizes modeled off sample craniums from people all over the world. The dummy heads, known internally as "Frank", helped ensure that the Zone sounds good and fits well for a range of domes.

The headphones, however, disguise the Zone's first primary purpose: to combat noise pollution. Namely, the loud environmental sounds all around us. Traffic and construction are two big ones.

Hearing loss is something most people do not think about. But research shows that slowly — very slowly — daily exposure to very loud sounds can lead to deterioration in hearing over time. Hearing aids used to be for life after retirement. It's not uncommon now to see younger people needing them to assist with hearing.

Right now, the best personal device we have to alert us about loud sounds in our environment is an Apple Watch. It'll send a notification that warns of loud sound exposure.

"It tells you the noise thing is above what's safe," says Gibson-Robinson. "And sometimes my phone tells me that my music's too loud, but it's a much untalked about problem."

The Zone hopes to not just tell you that you're exposed to very loud sounds, but help cancel them out with the noise cancellation. It's probably no surprise that the headphones do look and function like more stylish versions of many noise reduction/cancellation headphones that construction workers use to protect their hearing.

Besides vacuums that look like space blasters, Dyson's renowned for its bladeless air purifiers. Dyson is one of the foremost companies with decades of research into air quality and development into technology innovations to help reduce pollutants.

The Zone is really the result of a research study project called "Breathe London" that Kings College London worked with Dyson on to gain insight into how children are exposed to pollutants such as PM2.5 and nitrogen dioxide (NO2). The study used a backpack with a built-in sensor to track and monitor the types and levels of pollutants they were exposed to in an attempt to alter their commutes to breathe in fresher air. The findings from Breathe London informed the need for personal air purification when outdoors.

When I asked Gibson-Robinson, whether the Zone was made with certain highly polluted cities in mind — Earth.org ranks India as having 12 of the top 15 most polluted cities in the world in 2021 — or if it's a product to address air pollution in general, I was told Dyson makes products for global markets. I said different cities might be more or less receptive to the air-purifying-headphones. For example, Beijing, a city with high levels of air pollution, but where its population is very conscious of the air quality, the Zone might actually be welcomed. In New York City, where I live, you might get beat up if you're caught in the wrong neighborhood wearing it.

Regardless of any social or cultural stigma, the Zone's air purification technology is a natural evolution from Dyson's work in air quality. The powerful motors are miniaturized versions of the ones in its home air purifiers and they're even smaller than the one inside of the Dyson SuperSonic hair dryer (a product I love).

The compressors in each earcup draw air through the dual-layer filters and project two streams of purified air to the wearer’s nose and mouth, channelled through the non-contact visor. Sculpted returns on the visor ensure purified airflow is kept near to the nose and mouth and diluted as little as possible by external crosswinds.

Remember earlier when I said the Zone does not protect from airborne particles like COVID? That's because the visor doesn't actually touch your face. Gibson-Robinson explained to me the Zone essentially creates a clean air bubble around your face, constantly keeping it as pollutant-free as possible. It’s a strange feeling, but I did feel cleaner even if it’s merely a mental thing.

In my demo, the motors are audible, but nowhere near as loud as the SuperSonic. I wasn't able to measure what pollutants the Zone was potentially filtering out and how effective it was at doing that. There will be a Dyson app for controlling the headphones and noise cancellation aspect of the Zone, but it's unclear if there will be any statistical information on the purification much like there on the screens of Dyson's home air purifiers and latest cordless vacuums.

The real test will be when people in highly polluted cities put the Zone through the wringer. I'm sure there will be plenty of eager YouTubers ready to do that when the Zone comes out.

One thing the Zone is not is a toy. Unlike Razer's Zephyr, which was a tad overzealous in its initial claim as an "N95-grade" air purification mask, the Zone is grounded in research studies spanning decades; it's an extension of Dyson's expertise and knowledge in air quality and air purification. Dyson hasn't announced a price for the Zone, but expect it to cost a premium like its other products.

The Zone is not a toy.

Dyson has always been a pioneer when it comes to solving real-world problems. Its products are expensive and they intentionally draw attention. Dyson has focused on personal wellness — cleanliness, comfort, and air quality — within the home. It's entering a new personal wellness territory — one that's outside — and the conditions are uncontrollable. I can't with any certainty say how effective the Zone is at combatting noise and air pollution until I get a pair to review myself, but I will say I'm glad Dyson is at least trying to solve these problems.