Over 500,000 people have reportedly pre-ordered the Cybertruck 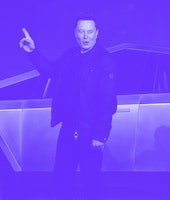 How many people have pre-ordered the vehicle so far.

It’s no secret we like the Cybertruck, and it’s equally common knowledge that lots of people loathe it. But we’re feeling somewhat vindicated considering at least 535,000 people apparently agree with us. That’s the unofficial number of people who’ve gone a step further and actually put down some money — albeit just $100 each — for the forthcoming pick-up according to cybertruckownersclub.com, which has been keeping count.

That’s almost 5,900 a day — As Electrek, which first spotted the unofficial count points out, Tesla CEO Elon Musk tweeted that 250,000 people reserved a Cybertruck in the first week after it was unveiled back in November, despite the on-stage, broken windows mishap that’s since been immortalized with an official, self-deprecating T-shirt design. That means, at the current count, there’s been an average of almost 5,900 orders a day for the futuristic, all-electric, multipurpose vehicle.

A pre-order is not a sale — Let’s be frank, $100 is not a lot of skin in the game. It would be totally unreasonable and irrationally optimistic to think that all pre-orders will convert to sales. But, as Electrek argues, making that pre-order fee so small means plenty of people are willing to pay it, which makes for great Cybertruck PR. It’s cunning, and we like it.

Tesla still has a long way to go if it’s going to get the Cybertruck past regulators and actually onto roads, but this number proves there’s a willing market that wants to see that happen. Fortunately for aspirant Cybertruck owners, Tesla’s also beginning to reach the point where its production capabilities can actually meet its previously notoriously overly-optimistic timelines. You can question the Cybertruck’s aesthetics, but don’t doubt its vibe.