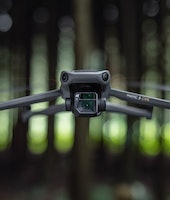 The amount of onboard storage of the Mavic 3 Cine.

With a slew of recent launches such as the modular Action 2 camera and OM 5 phone gimbal, DJI is on a hot streak. Now, it’s back to what DJI is best known for: drones. Today, DJI’s announcing the Mavic 3 and more premium Mavic 3 Cine, the successors to its popular Mavic 2 drones.

Upgraded cameras and flight time — The Mavic 3 is a total upgrade from 2018’s Mavic 2 Pro. The new foldable drone has an updated shape and components that reduce the overall weight of the device and create 35 percent less drag.

The main camera unit is called the L2D-20c and is capable of capturing up to 50 fps (yes, 50 fps, not 60 fps — I did a double take took) in 5.1K and up to 120 fps in 4K (this will come in an software update after launch). The primary 24mm lens has an 84-degree FOV with an aperture range between f/2.8 and f/11. Still keeping its relationship with Hasselblad as tight as ever, DJI’s new Mavic 3 features a larger 20-megapixel 4/3 CMOS Hasselblad sensor for higher-quality images that are less cropped compared to the Mavic 2 Pro’s main 1-inch sensor. In addition to higher resolution, a larger sensor allows for more light to be captured, improving the camera’s dynamic range to 12.8 stops.

The Mavic 3 has a secondary camera with a smaller 1/2-inch CMOS sensor; it’s a 162mm telephoto lens with 28x hybrid zoom for super close-up shots. Considering the size of the sensor and lens, the f/4.4 aperture is impressive and should provide a reasonable depth of field. A third, wide-angle lens with a 108-degree FOV is sold separately.

Pro video features — For recording video, the Mavic 3 can shoot in either H.264 (200Mbps bitrate) or H.265 (140Mbps bitrate) codecs. You’ll have the option between shooting in 5.1K, 4K, and FHD, with framerates ranging from 24 fps for the classic cinematic look up to 120 fps for slow-mo footage (5.1K footage tops out at 50 fps). The camera also supports shooting in 10-bit D-Log, a color profile that, though very unsaturated, captures an incredible amount of detail that requires color grading for the full-color experience.

A more expensive version of the drone, the Mavic 3 Cine, will support Apple’s ProRes 422 HQ codec, which has a whopping max bitrate of 3,772Mbps. With gigantic files that need to be transferred to storage quickly, DJI packed an impressive 1TB SSD (700Mb/s read, 471MB/s write) onboard the drone. While enthusiasts don’t need the future, videography professionals won’t flinch at the price tag.

In comparison, the standard Mavic 3 only has 8GB of internal storage that’s barely enough for a few, short 4K/120 fps videos. DJI says the microSD card slot can handle cards up to 2TB, but those don’t even exist yet. Not to mention, microSD card speeds only support UHS-1 (10Mb/s write), which is just barely good enough for 4K. This is definitely the weakest part of the internal specs, and I do hope DJI adds supports for faster microSD cards.

Safe flight — Besides the cameras, DJI has made improvements elsewhere. One of the most important improvements is the O3+ video transmission system that extends the operational range of the drone up to 9.3 miles (15 kilometers) while also establishing a more secure connection. An additional dongle can make the connection even more secure by taking advantage of 4G networks, though it won’t be sold in the U.S. As for keeping your eye on the action, the drone can transmit a 1080p/60 fps live video feed to the controller — it’s the first DJI drone to do so.

Another key feature that can prevent your drone from getting trashed is DJI’s Return to Home (RTH) feature. The feature allows the drone to return to its starting place when it runs out of battery or loses connection. The returning feature still does that but much better. The drone can now calculate what the safest and more energy-efficient route is. It’s also able to measure how windspeed affects the battery life to adjust when the best time to return home is.

When flying, the drone uses an updated 5.0 version of the Advanced Pilot Assistance System (APAS). APAS 5.0 uses six fish-eye sensors and two wide-angle sensors to detect its whereabouts, whether you’re going up, down, forward, backward, or sideways. Thanks to GPS, GLONASS, and BeiDou satellites, the Mavic 3 can use those signals for its positioning algorithm, which increases its stability when shooting longer content in a stationary, hovering position.

The ActiveTrack 5.0 feature is also upgraded and is now able to move along with the subject as it tracks them instead of simply staying stationary. In addition, when subjects leave the frame, the APAS 5.0 sensors can continue to monitor until the subject returns.

Available now — The myriad features packed into the Mavic 3 are overwhelming, and that’s not even covering its intelligent shooting modes that can shoot automatic videos to upload content quickly. There’s also a whole list of accessories such as the 65W fast charger that can top up the battery in 96 minutes. There are also two sets of ND filters, which are, in my opinion, necessary if you’re shooting footage in really bright environments. Trust me: once you’ve used an ND filter for daytime shooting, there’s no going back. Other accessories like the carrying bag and storage cover make it easy to transport the Mavic 3. The 10Gbps cable is another must-have to transfer large 4K or 5.1K videos to your computer as fast as possible.

If you’re itching for a bird’s eye view, DJI is launching the Mavic 3 today for $2,199. The $2,999 Fly More Combo get you extras like two additional batteries, a charging hub, a storage cover, and the starter ND filter set. For the top-of-the-line Mavic 3 experience, you can pick up the $4,999 Mavic 3 Cine Premium Combo; it comes with even more accessories, including the DJI RC Pro controller, both sets of ND filters, the 10Gbps data cable, carrying bag, and more.