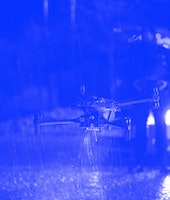 Bring on the heavy rain, high winds, and snow. DJI announced its flagship enterprise drone, the Matrice 30, that was designed to handle the harsh weather that comes with commercial usage. DJI is known for its consumer drones for photography and video, like its Mavic or Mini offerings, but the M30 is more of a rugged cousin that’s specifically designed to take on tasks like land surveying, inspections, or emergency response.

Like DJI’s other commercial drones, the Matrice 30 can handle operating temperatures between -20 degrees and 50 degrees Celsius. DJI improved on its design so it can better handle rain and dust.

To go along with the new commercial drone, DJI released an improved fleet management software called FlightHub 2, a new remote controller and a dock that allows for autonomous programmed tasks. A lot of the Matrice 30’s features are specific to commercial usage, which follows more stringent regulations, but the additional water resistance and better wind resistance would be welcome additions for DJI’s consumer-focused drones.

Mission-ready — The Matrice 30 features a 48-megapixel 1/2" CMOS sensor that can zoom up to 16x optically and up to 200x digitally, alongside its 12-megapixel wide-angle camera. The drone face also has a laser rangefinder that can pinpoint coordinates of things up to 1,200 meters away, or nearly 4,000 feet away. There’s another version of the commercial drone, the Matrice 30 T, which offers a thermal camera with 640 x 512 resolution along with the rest of the cameras on the base Matrice 30.

Like the commercial drones that came before it, the Matrice 30 has six-way sensors to avoid obstacles, 15 m/s wind resistance, a max speed of 23 m/s and can reach a 7,000-meter (23,000-foot) service ceiling with high altitude propellers.

All the bells and whistles — To go with the Matrice 30, DJI introduced its new RC Plus remote controller that has a seven-inch HD screen and has a IP54 rating, meaning it’s slightly less water resistant than the drone.

One of more interesting add-ons is the DJI Dock, which is an autonomous takeoff, landing and charging station for the Matrice 30. You can program automatic flights with the dock and fast-charge the drone in roughly 25 minutes.

DJI said the Matrice 30 package that includes the drone, remote controller, two batteries, a battery station, and a storage case starts at $10,000. The thermal version of the drone package starts at $14,000. The Matrice 30 is already available through the DJI website and through its enterprise dealers, but the dock is currently being tested and will be available in the fourth quarter of this year.