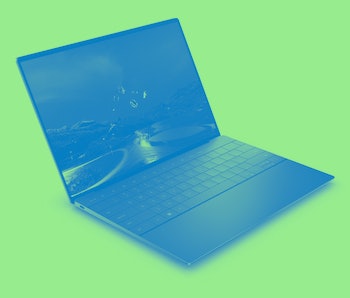 Arguably one of the most interesting laptop designs shown off at CES 2022, Dell’s new XPS 13 Plus is available to order today, April 28, for a starting price of $1,299, notably $100 more than the company initially estimated the laptop would cost.

You look different — From the outside, the silvery platinum or dark gray graphite finishes Dell offers on the XPS 13 Plus seem like plenty of other laptops in its XPS line. But inside, things get pretty interesting.

The biggest changes concern the keyboard side of things, though. Dell nixed the traditional function row here in favor of touch-based capacitive keys that can change between media controls and function keys as needed. The keyboard features wider keycaps arranged in a “zero-lattice” design and two upward-firing speakers underneath the keys. The trackpad is also straight-up gone.

Dell hasn’t made the leap to motion controls (though you can spec your XPS 13 Plus with a touchscreen), instead opting for an invisible trackpad that fits seamlessly into the bottom of the laptop. There’s haptic feedback so you know when you’re clicking, but otherwise, there’s really nothing to designate where the trackpad begins or ends.

Dell’s design decisions are fascinating, but the ultimate test will be whether or not they alienate the company's existing fans.