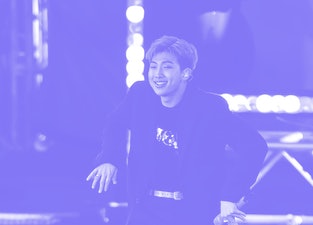 The number of AirPods the leader of BTS says he's lost.

Losing AirPods (or just a single bud like me) sucks — like really sucks. But our pain is nothing compared to BTS leader Kim Namjoon, aka RM, who says he's lost 33 pairs of AirPods. Does he know about Find My AirPods?

AirPods have only been around for 3 years. He's using and losing 11 pairs of AirPods per year. Let that sink in for a second!

So many dead AirPods — RM revealed his AirPods addiction — more like forgetfulness if he's always losing them — during a livestream. He revealed he's on his 34th pair of AirPods after a fan told him they lost theirs. Apparently, he's constantly reminded of his fallen AirPods whenever he opens his Bluetooth settings and sees their device names.

A lot of e-waste — The non-repairable nature of AirPods means they're basically impossible to recycle and not very eco-friendly. If you lose them, they're probably going to end up in the trash. But there are easy ways to keep track of your AirPods: get a keychain case (they're like a few bucks on Amazon) or attach a Tile item tracker to it. Maybe RM's fellow BTS mates should get him one (or both) of these for Christmas.