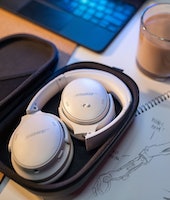 How much the Bose QC45 ANC headphones retail for.

Bose Quiet Comfort 35 II headphones are some of the best noise-canceling cans around. But since they were released in 2017, the ANC headphones have been lapped by Bose’s own Noise Cancelling Headphones 700, Sony’s near-perfect WH-1000XM4, and even Microsoft’s Surface Headphones 2.

After an eternity, Bose has announced the Quiet Comfort 45 noise-canceling headphones. Pre-orders open today, if you want to secure a pair; the headphones will be available to purchase at retailers on September 23 for $329. The price is $30 more than theQC35 II that it’s replacing, but you get way more than $30 of features with the new model.

Shhh! — Though the QC 45 keep the same overall design as the QC35 II, the insides have been overhauled. Obviously, these headphones are noise-canceling. However, the ANC tech has been updated to activate within a fraction of a second when in “Quiet” mode and “respond to more unwanted sounds in mid-range frequencies,” says Bose. There’s also a new ambient “Aware” mode that uses the mics to pick up external sound to allow you to hear your surroundings. Switching modes works with the press of one of the buttons.

Similar to the QC 35 II, the QC45 has four buttons on the right earcup for volume up, volume down, power, and Bluetooth pairing. The sole button on the left earcup has two functions for either toggling between QUIET and AWARE modes or muting the mic when on a call. And speaking of the mic, the new headphones use voice isolation via a beam-form array that focuses on your voice and blocks out other sounds. This is welcome since my wife has complained about voice calls sounding echoey with the Bose Headphones 700.

The biggest flex in the updated headphones is the battery, which Bose claims can last up to 24 hours for “the longest flights in the world.” (I’ll have to test that claim next time I go to Singapore, which took me about 24 hours the last time.) A full charge takes two hours, but if you need just a few hours, you can charge for 15 minutes for three hours of battery. And, yes, the QC 45 headphones use USB-C.

Heir to the throne — With the Bose Headphones 700, Bose went with a top-to-bottom redesign. The QC45 doesn’t discard the foundation laid down by the QC 35 II. That’s not necessarily a bad thing since people still swear by the QC 35 II, especially for flying.

If your pair of QC 35 II are getting long in the tooth and you’ve been waiting for a new version that’s just as comfortable and familiar, the QC45 are worth a look.