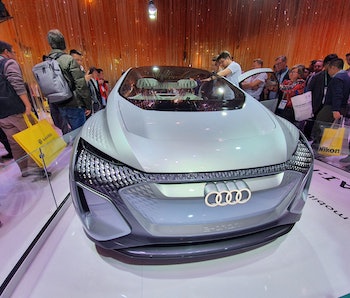 Audi’s billing its latest concept car, the Audi AI:ME, as an “empathetic mobility partner,” which is some superb marketing speak for some of the loonier included features — of which there are plenty. But among them there are some solid ones we’d like to see trickle down to production vehicles, like a mixed-reality head-up display that shows drivers precisely where to turn, not just that a turn’s coming up.

The AI:ME (pronounced “Amy”) is empathetic enough to know people might actually still want to drive it, so pedals and a steering wheel are present and accounted for, despite its self-driving capabilities.

But, if that seems like a chore, drivers can don the included VR headset for virtual entertainment that responds to the car’s movements. Or they can use the eye-tracking-based hands-free interface to order their favorite dish with delivery timed so it arrives at their destination when they do. Yeah, like we said, it’s a little silly. But that’s precisely what concept cars are all about.

A mood ring you can drive –– Audi says its admittedly cute, optionally-autonomous hatch will use machine learning and sensors (look, we do love a good sensor) to learn drivers' preferences and adjust everything from seat position and temperature to “fragrancing of the interior” to match.

Another fanciful project from Audi called “Human-Centric Lighting” proposes bathing the driver in “blue, cool white light” to wake them up if the vehicle detects they’re getting a little snoozy. Frankly, that sounds dreadful. We’d definitely prefer the car take over driving duties and let us have a recuperative nap, or find us the nearest coffeeshop and route us to it.

But we’re willing to endure a little silliness in exchange for being spared the drudgery of stop-start traffic. Plus, who doesn’t like take-out?