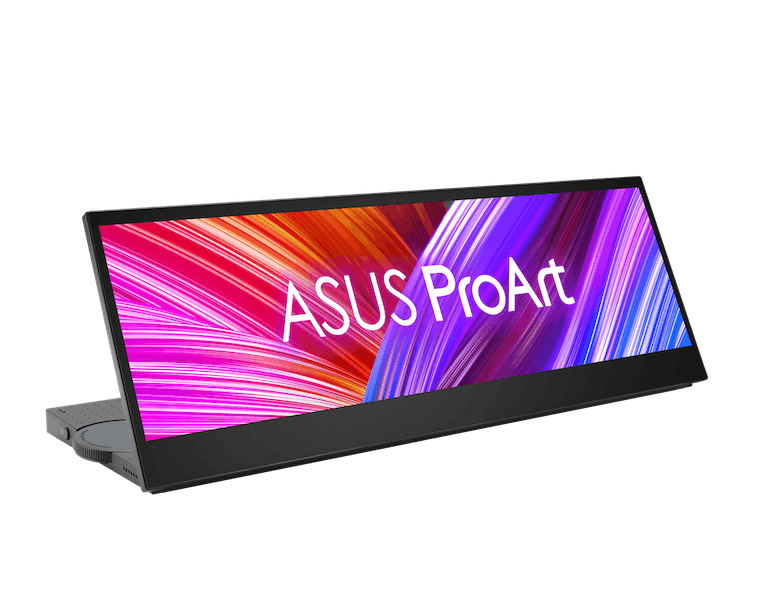 As ridiculous as a 32:9 aspect ratio sounds, Asus’ 14-inch ProArt Display PA147CDV may actually be the perfect addition to your setup. The small, squat height lets it conveniently slot underneath your main display, but the wide screen still gives you plenty of room for whatever creative application you throw at it.

Even though it was designed primarily with creative tasks in mind, like drawing directly on the touchscreen monitor or using it as a digital deck for editing videos, you can still use it just as a monitor with a funky aspect ratio. For example, you can set it up vertically for your Twitter or chat feeds, or just use it as a portable display for when you need to get something done on the go.

There’s already a handful of decent portable monitors out there, but they’re mostly in traditional aspect ratios and don’t have as many features as the PA147CDV. Plus, it’s part of Asus’ ProArt monitor lineup, so there’s some really good color control and accuracy built in.

Full of functionality — The PA147CDV has a 1,920 x 550 resolution, giving us the unique 32:9 aspect ratio while the display itself is touchscreen with a refresh rate of 120Hz. Asus designed its mini ultrawide monitor with a mechanical kickstand that allows it to fold down completely into a tablet style or propped up to act as a second screen.

The Asus dial built into the PA147CDV is fully customizable and can be programmed for certain functions in apps like Adobe Photoshop, Lightroom or any other app that has Microsoft Surface Dial compatibility. The mini monitor also supports Microsoft Pen Protocol 2.0, so you can even draw on it with styluses.

For those who need rely on color accuracy for their work, the PA147CDV is Calman verified and factory pre-calibrated to Delta<2 color difference. The display has 10-bit color, 100 percent sRGB and 100 percent Rec.709 color gamut so you’ll always get the true color with whatever you’re working on.

On display — Along with the PA147CDV, Asus also announced its auto-calibrating OLED monitor, the PA32DC, its 34-inch UWQHD monitor, the PA348CGV, and its Calman-verified projector, the Projector A1, as part of its new ProArt lineup.

All three of the monitors will be on display at NAB 2022 in Las Vegas, but there aren’t any pricing details just yet. The mini ultrawide monitor is expected to release in the second quarter of 2022 in North America, while the other two monitors are expected to come out in the third quarter of the year. Asus’ Project A1 is the only one currently available, going for $1,499.