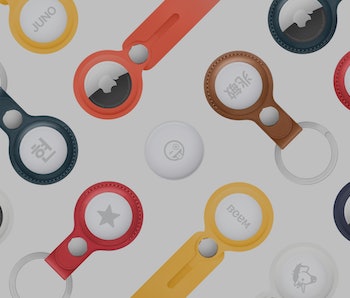 We’ve known since last year Apple's been working on tracking devices called AirTags, but at least it’s unveiled them officially. In classic Apple style, they offer all the key features of rival devices, but outdo them in a number of key aspects, thanks to the deep integration of hardware and software only a company like Apple can manage.

First up, there's the pairing. Unbox an AirTag, pull out the tab that prevents the battery from touching a contact to activate it, and you'll immediately be prompted to set up the new AirTag on your iOS device in the "Find My" app. That's a pretty seamless process, much like when you flip open the lid on the case of a set of AirPods and immediately get an on-screen pairing request. Furthermore, the "Find My" app is already preinstalled on iOS devices, so there's nothing new to download. AirTags will appear under the new “Items” tab in the app.

AirTags use a combination of Bluetooth and NFC, meaning not only can a lost item with an AirTag attached potentially be found by any of the world's millions of iPhone, iPad, or MacBook owners, but when another user does find it, the AirTag will display your contact information to them. Like Tile or Chipolo devices, it's also possible to get an AirTag to emit a sound if you're near it, or to use Ultra Wideband via the U1 chip on an iPhone 11 or 12 to get an arrow that guides you to the tracker.

Replaceable battery — One of the key complaints rival trackers have faced is that many of them use non-replaceable batteries, which is bad both for the environment and consumers' wallets. Tile only started offering replaceable batteries a few generations of devices in. Apple's AirTags, meanwhile, use the common CR2032 battery used in watches, remote controls, and other small devices, right out of the gates. And, thankfully, users will be able to swap out the battery themselves rather than having to take them to an Apple Store.

The U1 chip — AirTags use Apple’s U1 chip, which up until now has only been used in the iPhone 11 and 12 to connect with other devices for AirDropping whatever files or memes you see fit to send. But it makes sense; the U1 chip uses “ultra-wideband” (UWB) radio waves to communicate, which are simultaneously high bandwidth and low range. AirTags will require iPhones or iPads running iOS 14.5, which is due out next week.

Technology aside, if you’re a forgetful person you’ll be delighted to learn that AirTags only cost $29, though you’ll need to provide the mounting yourself. Apple will sell you a tiny leather keychain separately, of course, and we expect to see a tidal wave of third-party pouches hit online stores within days. A four-pack will cost you $99.

By comparison, Samsung’s Bluetooth-only SmartTags cost $29.99 each, while its UWB SmartTags+ cost $39.99. Those prices come down somewhat if you buy multipacks.

Great for Apple users, bad for the rest — Apple's already embroiled in a lawsuit with Tile, which alleges Apple has engaged in anticompetitive behavior by limiting its app’s functionality. Tile argues that the company's reluctance to allow the Tile App to constantly access an iPhone's location — essential for Tile hardware to work properly — isn't as Apple claims down to security concerns, but was instead an effort to hamstring its devices in anticipation of launching its own AirTags. Tile has also claimed Apple refused to let it use UWB in iPhones for its products. Apple, of course, denies Tile's accusation.

No matter how the legal maneuvering plays out, though, Apple's Tile equivalent is here now, and it looks set to instantly reduce the appeal of Tile for iOS users. Tile says it's sold over 20 million devices, but the odds against it selling 20 million more keeps growing. Samsung’s SmartTags range (which went on sale in January) gives users of Galaxy devices a Tile alternative, and now Apple users have one, too.

Correction: An earlier version of this story incorrectly stated that users can temporarily share their location with others. AirTags do not share any location information and have a number of privacy safeguards to prevent unwanted tracking. You can read our in-depth review here.