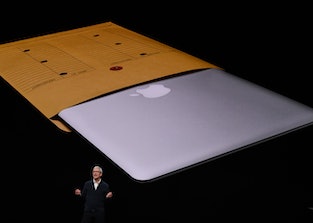 The date of Apple's next virtual event.

Here we go again. Apple is holding yet another virtual event for the third month in a row. In an invitation sent to media, the event teases "One more thing" on November 10, which we presume will be for the announcement of its first Mac powered by Apple Silicon.

As with all of Apple's events this year, the spectacle will be streamed online starting at 10 a.m. PT / 1 p.m. ET.

Apple Silicon Macs — This is what everyone is expecting Apple to announce. At WWDC, Apple said it would take two years for Macs to transition from Intel to Apple Silicon. Which Mac will be the first to get Apple Silicon? To use ARM architecture based on the custom chips Apple has been designing in its A-series chips for iOS devices for a decade?

TF International Securities analyst Ming-Chi Kuo noted several times this year that the first Macs to switch to Apple Silicon could be the 13-inch MacBook Air or Pro. The iMac has also been floated as an option. The latest rumors suggest the first Apple Silicon-powered Mac will come with an "A14X" that's based on the A14 Bionic chip shipping in the iPhone 12, 12 Pro, 12 Pro Max, 12 Mini, and iPad Air 4.

The most interesting tidbit from Bloomberg's report: "Apple engineers are currently developing a new Mac Pro that looks like the current design at about half the size."

Hmm... that is interesting. A smaller Mac Pro that costs less than the current tower's $6,000 price tag would be appealing to anyone who doesn't want and iMac.

Why the switch? — As we detailed shortly after WWDC, Apple leaving Intel was inevitable. The chipmaker has been struggling to deliver 5-nanometer chips for laptops and desktops and refreshes for the Mac have been held up as a result. Leaving Intel allows Apple to control the timeline for its product roadmap without reliance on another company's (delays and all).

Another reason Apple is leaving Intel: power and performance. Intel remains the largest chip supplier for PCs, but it hasn't been able to deliver significantly better performance and energy efficiency for thin-and-light laptops and slimmer desktops. And you know Apple: it loves making thin, light, and powerful computers.

At WWDC, Apple boasted that its own silicon would offer higher performance and increased energy efficiency. In other words: a major win for Apple devices. Users get beefier computers (hello real gaming?!) and potentially longer battery life.

Additionally, Apple Silicon will allow Apple to integrate more advanced machine learning features that make use of things like the Neural Engine on the Mac. Face ID on Mac? It could happen now!

Best of all, macOS Big Sur's packing a new Rosetta 2 app that will automatically translate Intel-based x86 apps so that they aren't left behind on Macs running on Apple Silicon.

Anything else? — Apple has still not released the long-rumored AirTags. AirPods-branded over-ear headphones have reportedly been bumped til 2021.

The Input gang will be covering the event next week. Stay tuned!