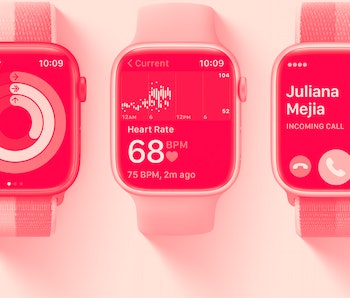 We’re about due for a redesigned Apple Watch, but it may not be the rumored flat design we were expecting. According to Bloomberg’s Mark Gurman, the Apple Watch “Pro” version that’s expected to be announced later this year will have a new look. Gurman says — in his PowerOn newsletter — that the new design will be “an evolution of the currently rectangular shape and not circular,” but also that it won’t have “those rumored flat sides.”

Gurman is referencing the rumored Apple Watch redesign that first surfaced in May. Leaker, ShrimpApplePro, started off the rumor mill after tweeting that the Apple Watch Series 8 could have a completely flat front glass and flat edges. Shortly after, another industry leaker Jon Prosser worked with Ian Zelbo to put out some renders based on the rumors.

Low-power mode — Prosser made a previous prediction that Apple would be going flat for Apple Watch Series 7, so either it’s being delayed once again or Apple was never planning to flatten out the design in the first place.

Even though Gurman debunks the rumored flat design, he also points out some other new features coming to the Apple Watch Series 8, particularly the “pro” model. Gurman is expecting Apple to include a temperature sensor and a low-power mode to its upcoming “Pro” smartwatch that will be housed in a titanium. The new features make a lot of sense since Apple is targeting this sporty model to more active users in an attempt to compete with current rugged smartwatches like those offered by Garmin.

Future features — There were rumors of even more health features, but Gurman notes that blood-pressure technology for Apple Watch likely won’t be around until 2025 and that glucose readings will take even longer — closer to 2030. We still don’t have a concrete idea of pricing, but Gurman noted in a previous newsletter that the Pro model could start at $900. Of course, we’ll get all the details soon when Apple debuts its latest smartwatches sometime in September.