Apple is reportedly jamming 14 cameras into its mixed reality headset 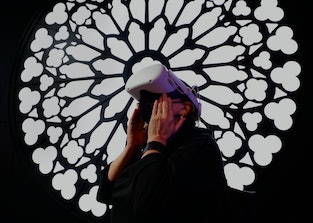 Apple's long-rumored mixed reality headset will be adorned with 14 separate cameras, according to a new report from The Information. This stands in stark contrast to current standalone headsets like Meta’s Quest 2 or HTC’s Vive Focus 3, which both use four cameras for video passthrough and inside-out tracking, Apple’s late entry will apparently have almost four times as many lenses.

Cameras — Following up on an earlier report detailing Apple’s (somewhat unusual) decision to add outward-facing screens to its headset, The Information writes that the extra cameras will be used to track the user’s face so that Apple’s virtual avatars will accurately represent faces and mouth movements in virtual reality experiences.

These two hardware decisions reportedly haven’t been without their issues. Using the cameras to track a wearer’s position in space, their hand movements, their facial movements, and offer video passthrough, not unlike Meta’s upcoming Project Cambria headset, has brought camera placement in conflict with the headset’s outside screens.

Apple couldn’t place cameras where users’ eyes should be — since there’s some kind of screen representing those eyes on the outside — forcing the company’s engineers to deal with more awkward placements, according to the report.

Conflict — The development of the Apple headset has been frequently mired in that kind of internal conflict, based on The Information’s reporting, from the design of the device to its actual functionality. Apple’s internal team reportedly spent years developing chips and software for a setup that used a “base station” connected to its headset (to split processing tasks like Qualcomm’s recent AR glasses concept) before shifting to a standalone headset design in 2019.

As an illustration of the kind of performance Apple was trying to get out of that original base station/headset combo, the M1 Ultra chip introduced alongside the Mac Studio originally appeared in the company’s mixed reality base station, according to The Information.

Despite the development chaos, Apple is getting ever closer to launching its device. Bloomberg reports that the current version of the headset was recently shown off to the company’s board, signaling that it could launch soon.

WWDC 2022 is only a few weeks from now on June 6. Who knows what Apple could have in store.