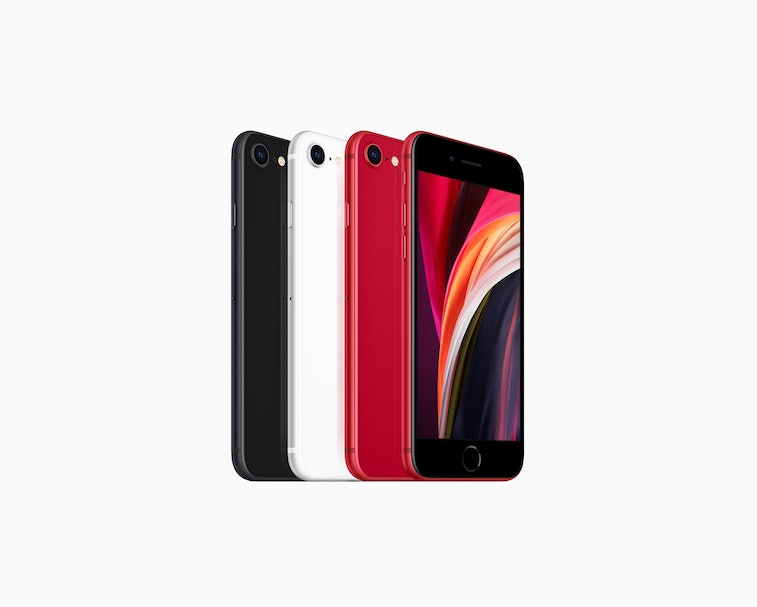 Continuing its blitz of spring hardware refreshes, Apple has brought the iPhone SE back from the dead. Well, sort of.

Discontinued in 2018, the new iPhone SE sports a larger display and updated specs. The original iPhone SE, released in March 2016, recycled the iPhone 5 and its 4-inch display and unibody aluminum design. But the new version cribs the iPhone 8 glass-and-metal sandwich aesthetic and 4.7-inch LCD screen.

Smaller and cheaper — The new iPhone SE isn't quite the same small smartphone the original was, but in the age of the 6.5-inch iPhone 11 Pro (rumored to grow to 6.7-inch on the "iPhone 12"), 6.78-inch OnePlus 8 Pro, and 6.9-inch Samsung Galaxy S20 Ultra, a 4.7-inch display is tiny. It's good to see Apple still cares about people with small hands who don't what to tote around a monstrous slab.

If none of this bothers you, like the original, the new iPhone SE also starts at $399. It'll be available for pre-order on Friday, April 17 and ship on April 24.

There's a 12-megapixel camera on the back and 7-megapixel selfie camera on the front. Nothing special. if you want an ultra-wide or telephoto lens, you're going to need to look into a pricier iPhone, like the iPhone XR, 11, or 11 Pro.

Like the iPhone 8, the new iPhone SE is IP67 water-resistant also supports Qi-based wireless charging. Notably missing is a U1 Ultra Wideband chip, which is in the iPhone 11 and 11 Pro and is rumored to be the underlying technology for Apple's upcoming Tile-like "AirTag" item trackers.

All things considered, the iPhone SE is an iPhone 11 crammed into an iPhone 8 body (now discontinued) with a smaller LCD screen and Touch ID.

All things considered, the new iPhone SE is an iPhone 11 crammed into an iPhone 8 body.

According to Apple, the iPhone SE:

"Monocular depth estimation" is a new technology for an iPhone. iPhones equipped with a TrueDepth camera system (iPhone X, XR, 11, and 11 Pro) create a depth map to blur out the background in selfies. It'll be interesting to see how the iPhone SE's portrait selfies compare.

Weirdly, the iPhone SE doesn't have a Night mode at all. This gives cheaper Android phones like the $399 Pixel 3a, which does have a Night Sight shooting mode, a slight advantage.

Express Transit — Also new: tap and go at transit terminals instead of pulling out a transit card. This wasn't supported on the iPhone 8.

Free Apple TV+ — Like all Apple device users, buying an iPhone SE also scores you a free year of Apple TV+. Good for watching exclusive shows like The Morning Show, For All Mankind, Little America and more.

With no in-person WWDC event scheduled to take place this year due to COVID-19, Apple will be leaning more on online announcements for new products. The company is rumored to be announcing 14-inch MacBook Pros, over-ear headphones, and Tile-like "AirTag" item trackers at its June developer conference.

Meanwhile, Apple is still on track to announce new flagship iPhones — the iPhone 12 and 12 Pro — this fall. The smartphones are expected to come with faster chips, larger and smaller displays, 5G, and more advanced cameras (at least some models might have the new iPad Pro's LiDAR scanner).