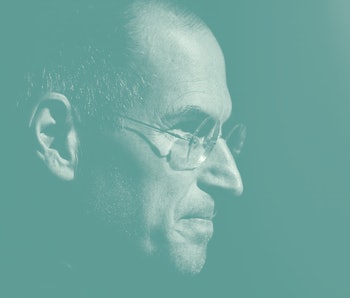 Apple is rumored to be developing an augmented reality headset, with a special edition styled like Steve Jobs' iconic rounded glasses. Unfortunately, for those keen to equip the late Apple founder's eyewear, there's good reason to believe they'll never see the light of day.

Jon Prosser, an Apple product leaker with an increasingly impressive track record, has this week outlined what he believes the company is planning for its rumored augmented reality headwear. On Monday, he released a video explaining that the glasses would cost $499 plus the cost of a prescription. It would also depend on an iPhone to actually run the apps, similar to the first-generation Apple Watch.

The Apple Glass would enable the user to see the world while displaying computer-generated visuals in both eyes, using a lidar scanner to map its place in the world. The device would use no actual cameras, solving an issue with privacy, and it would charge up wirelessly. In short, it sounds incredible.

But Prosser expanded on these claims Thursday, during an appearance on Cult of Mac's podcast. He claimed the company is also planning a "Steve Jobs Heritage" edition of Apple Glass. Prosser described it as a "pure marketing ploy," similar to the $10,000 Apple Watch Edition made of gold.

Remembering Jobs – Gurman's claim suggests Apple isn't about to immortalize its co-founder, who died in 2011, with a set of glasses. Over the years, Apple has respectfully paid tribute to its co-founder, most notably naming its on-campus auditorium the Steve Jobs Theater. CEO Tim Cook gave a speech about Jobs' legacy during the auditorium's first keynote in September 2017.

But the firm has historically shied away from commemorating its history with product launches – bar one rare exception. In 1997, under the direction of now-legendary designer Jony Ive, Apple launched the Twentieth Anniversary Mac to mark 20 years since its founding. Only 12,000 were made, each one costing a staggering $7,499. Jobs himself reportedly hated it.

Another reason to dismiss the rumor is that the idea is just a bit odd. MacRumors editor Joe Rossignol wrote as much on Twitter Friday:

"I've always been more of a relayer of rumors rather than a leaker myself, so this is merely my opinion when I say that a Steve Jobs edition of Apple Glasses would certainly surprise me. The idea just strikes me as a bit insensitive/weird."

File this one under "big if true." But right alongside "fantastic rumor-mill fodder."