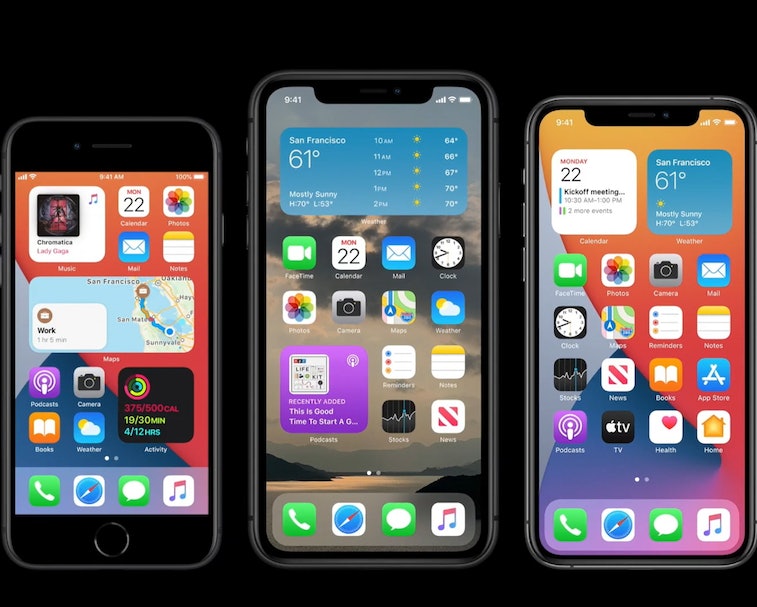 Apple’s WWDC keynote was virtual this year, but that didn’t stop it from announcing the next version of its mobile software, iOS 14.

Fourteen versions since its debut changed the world, Apple is refocusing its improvement efforts on strengthening iOS’s tent poles. That means more little changes and improvements across iOS and less of an aesthetic change. For users frustrated by the bugginess of iOS 13 and its many subsequent updates, the under-the-hood prioritization is appreciated.

Widgets upgrade — Any iOS users will tell you that the implementation of widgets has been underwhelming. They were bolted onto the Notification Center at first and then later given its own space to the left of the main home screen.

A "Smart Stack" widget is a full-width widget that changes based on the time of day.

Organizing the home screen — One of the bigger changes to iOS is App Library, which automatically groups apps together beyond the manual grouping you can already do with folders.

Also: you can hide apps from the home screen with App Library. There’s also a new list view mode as well.

Messages upgrade — Arguably iOS's most important feature, Apple is giving the Messages app a few very welcome upgrades like the ability to mention (basically @) a person in a chat, thread messages in a group chat, and pin important conversations to the top of the app.

And of course, there's a bunch of new Memoji stickers and personalization features (20 to be exact). Can't have an iOS update without more Memoji.

Picture-in-picture — In case you ever wanted to watch videos in the corner while doing something else. Now you can.

Redesigned Siri — Activating Siri no longer kicks you off the screen you're currently on. A new Siri animation appears at the bottom of the display.

In landscape mode, Siri will automatically detect the language that's being spoken between two people and translate them accordingly.

Universal search — iOS 14's search now works more like Spotlight on macOS and third-party search app Alfred. It's basically the one search bar to rule them all. In addition to being able to pull up files, iOS 14's search will give you more relevant information based on search terms and answer questions as well.

Less obtrusive call notifications — A small change, but welcome. When a call comes in, it no longer takes over the whole screen. Yay.

App Clips — In Android P, Google introduced a feature Instant Apps that let users access select features without needing to download the full app. You probably already know what I'm going to say next: Apple cloned the it and is calling it App Clips.

Apple demonstrated App Clips being used to pay for parking without needing to download the app. App Clips is a feature that could easily go overlooked. But as someone who has dozens of apps that I only need to use once or twice a year (i.e. transit apps specific to a city), App Clips could potentially save me a ton of storage.

Apple says App Clips can be launched using NFC or by opening links sent via iMessage or clickable in Safari.

Apple split iOS last year, forking it into iOS for iPhone (and iPod touch) and iPadOS for iPads. By doing so, Apple gave the tablet version more specific features better suited for their larger screens (and eventually more laptop-like capabilities for the Magic Keyboard).

In iPadOS 14, Apple's tweaked several of its preinstalled apps to make them usable on an iPad's larger display. I kid you not, Apple spent a few minutes bragging about the new sidebar in the Photos and Music app. I guess that's one way of updating an app without changing too much. Hurray for organization! Apps

Scribble with Apple Pencil — An Apple Pencil is an essential input tool for the iPad. In iPadOS 14, you'll be able to convert handwritten text into digital text — handy for entering information into text boxes. Converted Scribble text is also copy and pastable. Another small update, but useful nonetheless.

Say no more. For iOS 14, here’s the complete list of compatible devices:

For iPadOS 14, the following devices will support it:

When can you install it?

Assuming Apple is following past release schedules, expect it to come out around the release of the iPhone 12. We’re not sure if Apple will release the software in late September, especially if the iPhone launches are delayed later in the fall, but sometime in the fall is a safe bet.

Developers can download the beta (warning: it’s usually not stable) starting today with their developer credentials. A public beta will be available in July.