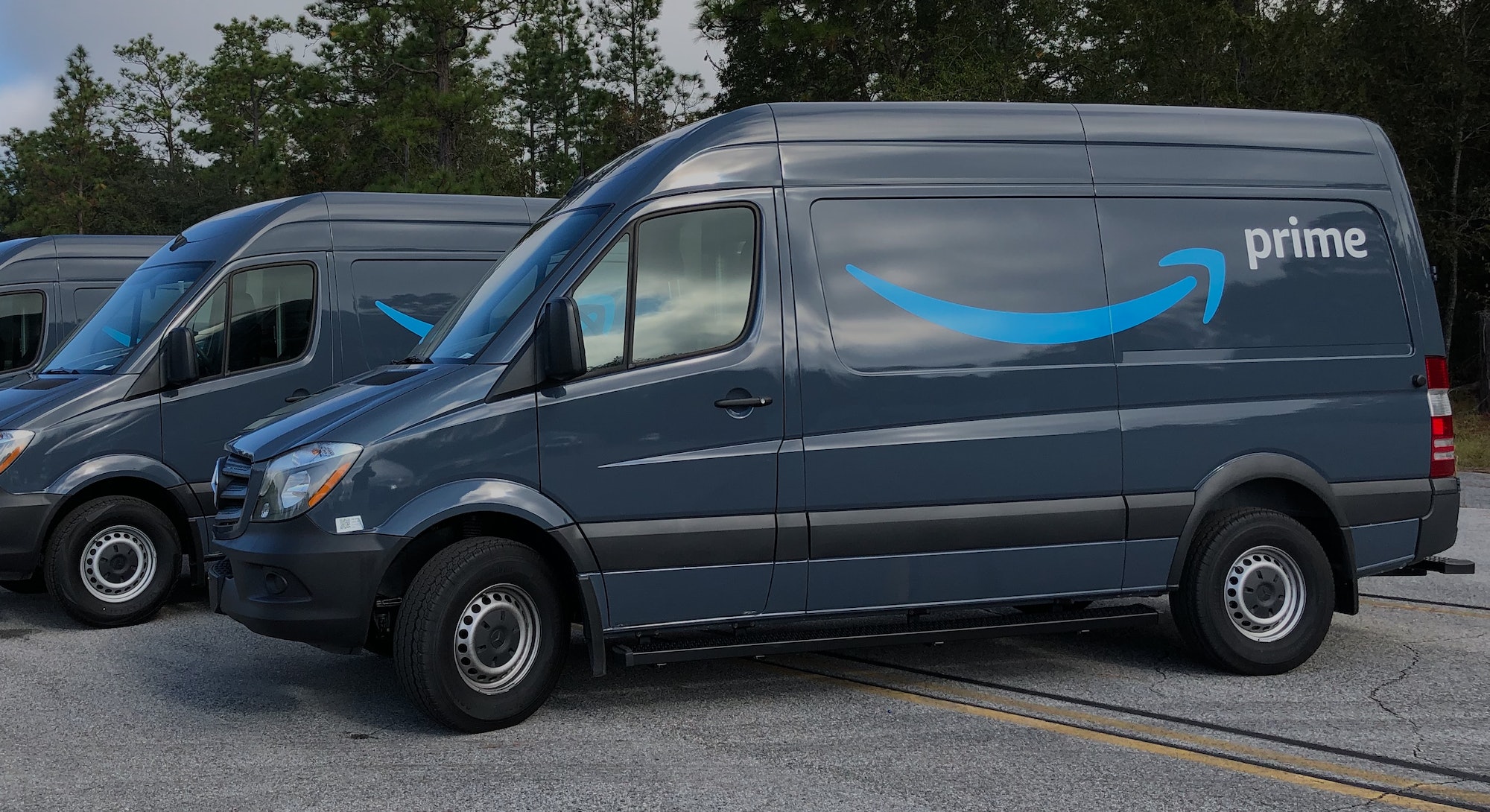 Our world has changed a lot in the last 18 months. We’re spending more time working from home, and we’re ordering a ton more stuff from Amazon.

And Americans are noticing something that they perhaps hadn’t heard before: That harsh, staticky shhh-shhh sound that emanates from the blue Amazon trucks as they back up their driveways to deliver packages.

Described by YouTube commenters variously as sounding like “a pissed raven or crow,” “a flock of hawks attacking or some shit,” and “Tool’s song ‘Ænema,’” the noise has baffled small town America in the last year or so.

What happened to the good, old-fashioned beep-beep sound?

Those of us in the U.K. are shrugging our shoulders and wondering why you’re freaking out so much. This is the sound vehicles make when they’re backing up. And it has been since around 1976, after British businessman Christopher Hanson-Abbott heard a similarly odd sound on the streets of Tokyo.

Hanson-Abbott, who was working in the shipping industry at the time, followed the sound and saw a truck backing up along the road. “I thought, ‘What a wonderful idea,’” he tells Input.

Hanson-Abbott, now 87 and a great-grandfather, took time off work to hunt down the inventor of the odd signal. “Eventually I found him, with a small family business in the mountains in the north of Japan, making ignition parts for these Japanese cars,” he recalls. The Japanese inventor agreed terms with Hanson-Abbott to market the product in the U.K. and Europe.

The angry bird–like sound the trucks emit is, scientifically speaking, good for people who don’t want to get backed over.

“I went to Britain, quit the shipping profession I’d been in for 21 years to peddle a product nobody had ever heard of outside Japan, for which there was no demand, in an industry I didn’t know, with nothing going for me except I’d seen it being tried out in Japan,” he says.

The gamble paid off. The first 50 alarms he packed into his suitcase on the way back from Japan sold “almost overnight” after he put an ad in Exchange and Mart magazine. His company, Brigade Electronics Group, now has a worldwide presence, including in the U.S. (He doesn’t know whether Amazon uses Brigade’s tech.)

Input reached out to Amazon to find out when its trucks began cronching rather than beeping, but the retail giant ignored our requests for comment. It seems likely, however, that the move toward a different alarm comes down to safety — given that the angry bird–like sound the trucks emit is, scientifically speaking, good for people who don’t want to get backed over.

The science of sound

So what is the science behind all this?

Let’s go 130,000 years back in time. Imagine you are a Neanderthal, walking across the plains. You hear the crack of a twig underfoot in the near distance.

“If you stand there and go, ‘I wonder where that came from?,’ you’ve just been eaten by a saber-toothed tiger,” explains Deborah Withington, a neurophysiology professor at the University of Leeds and founder of Sound Alert Technology. She developed a broadband reverse siren system that is more easily audible. (That’s broadband as in broad frequency, not the internet.) It uses the same principles that Hanson-Abbott’s tech does and makes a similar sound.

It’s exceedingly difficult to localize the source of the snapping of a twig — just as it is to figure out where a single, high-pitched beep is coming from. Which is probably why a 2009 report to Congress found 18,000 Americans are injured and nearly 300 killed every year from vehicles reversing into pedestrians and cyclists.

“If you want to be safer, you need to have a broadband sound,” says Withington. “The beep-beep is very narrow. It’s almost individual frequencies, and it’s just not possible to pinpoint that.”

“You go, ‘Oh, for flip’s sake, I’m not going to bother responding to that beeping anymore.’ And of course, it’s the one time the vehicle is coming towards you.”

A creepy killer type tapping you on the shoulder while he’s switching on a flashlight? Your superior colliculus activity is going off the charts. “It doesn’t respond to things that are there all the time,” says Withington. “It’s about novel sensory experiences, because it’s about survival.”

The human ear and brain are finely tuned to listen for and compute noises at different frequencies. Speech, one of the key forms of communication, generally occurs between a range of around 500 to 3,000Hz. However, speech gives us little indication of location through its frequency, largely because you’re usually in visual contact with someone you’re talking to.

Instead, our brain uses different methods to try and calculate location from sounds. For low-frequency sounds, roughly 1,000Hz and below, we use a method called interval timing difference. You can experience it in action when you click your fingers off to the right of your head — you hear it in your right ear just before your left. For higher frequencies, your brain isn’t working directionally, but instead relies on the loudness difference in the sound in each ear to pinpoint where it’s coming from.

The range of frequencies that give our brain basically no locational information whatsoever? Between 1,000 and 3,000Hz. “Guess where beep-beeps fall?” says Withington. Also, though the beep-beeps are annoying, the brain does something called habituation, realizing it’s heard the noise several hundred times before. “You go, ‘Oh, for flip’s sake, I’m not going to bother responding to that anymore,’” says Withington. “And of course, it’s the one time the vehicle is coming towards you.”

Safety-wise, broadband frequency alarms are superior to the old beep-beep in that their “sound is instantly locatable by the listener,” says Hanson-Abbott. That’s because they cover a wide range of frequencies, all audible by humans, rather than focusing on a single tone. “Tonal sound tends to ricochet off any surface and give the listener false directional clues,” he adds.

What Hanson-Abbott describes as broadband’s “huge safety feature,” is probably why Amazon has adopted such frequency alarms. A ProPublica investigation found more than 60 accidents involving Amazon delivery drivers occurred between 2015 and 2019, resulting in 10 deaths.

There’s no way of knowing how many accidents have been caused by Amazon trucks going in reverse, of course. But the change to that backup sound has the very real potential to save lives — even if it annoys the hell out of some sleepy suburban homeowners.