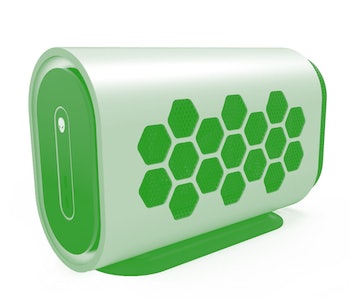 Alienware is tantalizing the gaming world once again by reintroducing Concept Polaris — a liquid-cooled eGPU that promises to give your laptop a big boost of graphical power.

The Concept Polaris is just a concept right now, but Alienware, which showcased the tech at CES 2022, seems to have taken what they learned with its previous eGPU, the discontinued Alienware Graphics Amplifier, and improved on it in every way. The Concept Polaris looks much cleaner with Alienware’s Legend 2.0 design that’s been featured on most of its current lineup. Alienware’s conceptual eGPU also has redesigned interior and a slimmer exterior that allows it to be positioned either vertically or horizontally.

Part of the Concept Polaris’ design, according to the company, was influenced by how working from home has changed all of our desk space into valuable real estate. These days, it might be a lot harder to squeeze a full-blown PC gaming setup onto your desk with all your work stuff and coffee mugs in the way. As a workaround, the Concept Polaris is designed to free up space by giving you the ability to play graphic-intensive games on whatever laptop you happen to be using.

Unlike the design of its Alienware Graphics Amplifier, the Concept Polaris was stripped of any built-in power supply and was built with two AC adapters. According to Alienware, there will be two variants, with one version using two 330W AC adapters while the other uses two 425W AC adapters.

Just a concept? — If released, the Concept Polaris could pair really well with any laptop looking for more graphics performance, including Alienware’s latest announced x14 laptop. The x14 brings back Alienware’s 14-inch laptop offerings and is the company’s thinnest laptop to date. The x14 was also built with a 12th gen Intel Core H-series processor, a Nvidia GeForce RTX 3060 and Alienware’s Cryo-Tech cooling.

As we said earlier, Concept Polaris is still a concept with no details on a release date or pricing. Alienware has definitely been generating some hype with its cool concepts lately though, including its Concept Nyx that acts as a central cloud gaming server within your home, and its handheld gaming PC dubbed Concept UFO.