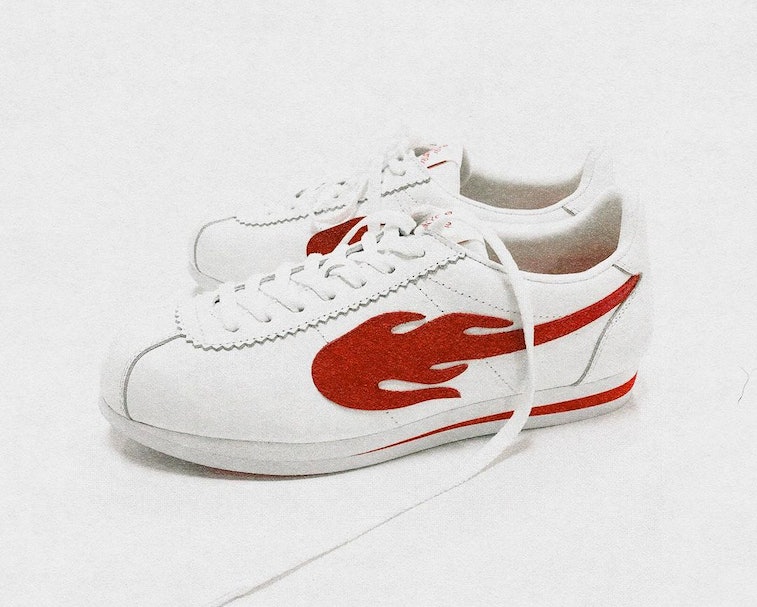 YG has announced plans to release his own sneaker under the 4Hunnid brand next year, taking inspiration from a Los Angeles staple. "The Flame" is a clear and obvious riff on the Nike Cortez, first released in 1968 before becoming one of the favored silhouettes in the city. With strong ties to gang culture and rappers going back to Eazy E, the Cortez is a natural jumping-off point for YG — but the question is if he can get away with it.

Nike just reached a settlement with Warren Lotas over his bootleg Dunks. The quick but well-publicized legal saga saw the sportswear giant taking aggressive measures to protect its designs, down to the shape of an outsole. YG's "The Flame" pulls cues from the Cortez that are just as conspicuous as Lotas', which could leave more than enough room for Nike to file suit again.

Unlike Lotas, YG has a higher profile and more financial power to defend himself. Nike could also choose to look the other way similar to how it has with Bape's Air Force 1-inspired Bapesta, so it'll be interesting to see what happens going forward.

YG's spin — Instead of a Swoosh, the rounded low-top sneaker features a flame insignia that gives the sneaker its name. Four color schemes have been teased, three of which feature YG's beloved red. His makeup also appears to use more premium leather than we usually see on the Cortez, which may just be the best selling point when (or if) The Flame sees a release.

The Flame marks the first sneaker for 4Hunnid, YG's four-year-old clothing line with the same name as his record label imprint under Interscope. 4Hunnid more or less wades in graphic staples from streetwear, bringing in looks signature the West Coast, including the Chicano scene.

Instagram users have been quick to point out the sneaker's ties to the Cortez, many with a disapproving tone. One commenter called the shoe a "Warren Lotas type beat," while another was more critical and said, "Couldn't you hire a designer to actually up with something unique?"

Planned for March — According to 4Hunnid's Instagram account, The Flame will release in March 2021. That is, of course, if Nike doesn't get litigious. Even though pre-orders had already been made for Lotas' Dunks, Nike was successful in its efforts to prevent the designer from fulfilling deliveries.