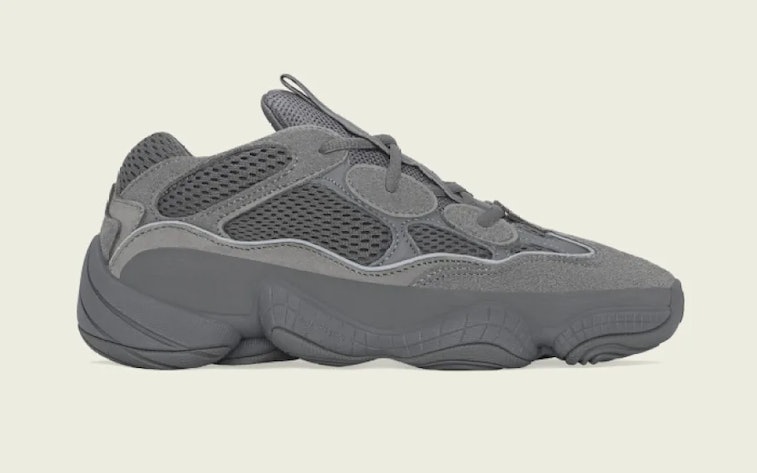 While increasing temps call may call for a switch from sneakers to sandals, Adidas Yeezy hasn’t finished rolling out its summer sneaker offerings. After delivering a “Sulfur” iteration of its Yeezy 450, the Kanye-led label plans to release a new version of its Yeezy 500 sneaker made up in a dark gray “Granite” color scheme.

Adidas has been fairly generous with its Yeezy restocks lately, with its Yeezy 500 marking the 16th opportunity to snag the sneaker since its debut in 2018. The shoe was last restocked in February in its original color, sending sneakerheads into a frenzy despite scarcity being driven down with each release. That said, Yeezy drops are known to be unforgiving — and those that miss out on the restock will have to turn to resale sites, where prices are already demonstrating the appeal around the re-release. On StockX, the “Granite” 500s are already listed for up to $400.

Good-looking granite — Of course, the neutral color scheme of the sneakers only adds to their appeal. An upper made of mesh, leather, and suede comes doused in a dark gray, nodding to Ye’s signature commitment to earth tones. The same shade dresses the laces and mudguard, with the latter providing abrasion resistance in the slim chance of hardcore wear.

Minimal branding, seen only at the toe, midsole, and insole, keeps the design’s focus on the bubbly sole unit. Underfoot, an adiPRENE midsole meets a chunky rubber outsole — a design identical to the KB8 basketball shoe, one of the sneakers that inspired the Yeezy 500. The outsole’s wide, wavy pattern provides better security and comfort to the wearer.

Pay a premium — The “Granite” iteration of the Adidas Yeezy 500 releases at 11 a.m. ET this Saturday, May 14, with pairs available via the Confirmed app, Yeezy Supply, and select Adidas Yeezy retailers. Avid sneakerheads may notice a change in the sneaker’s retail price — bumped from its original $200 to $210 — most likely due to ongoing supply chain issues that have affected the streetwear industry as a whole, not to mention inflation.

A $10 price increase won’t deter hypebeasts and resellers from going after the restock — especially compared to prices on the resale market. Paying a premium for kicks has become more standard for sneakers, both within and outside of the Yeezy line, so make sure to secure some while you can still afford to.