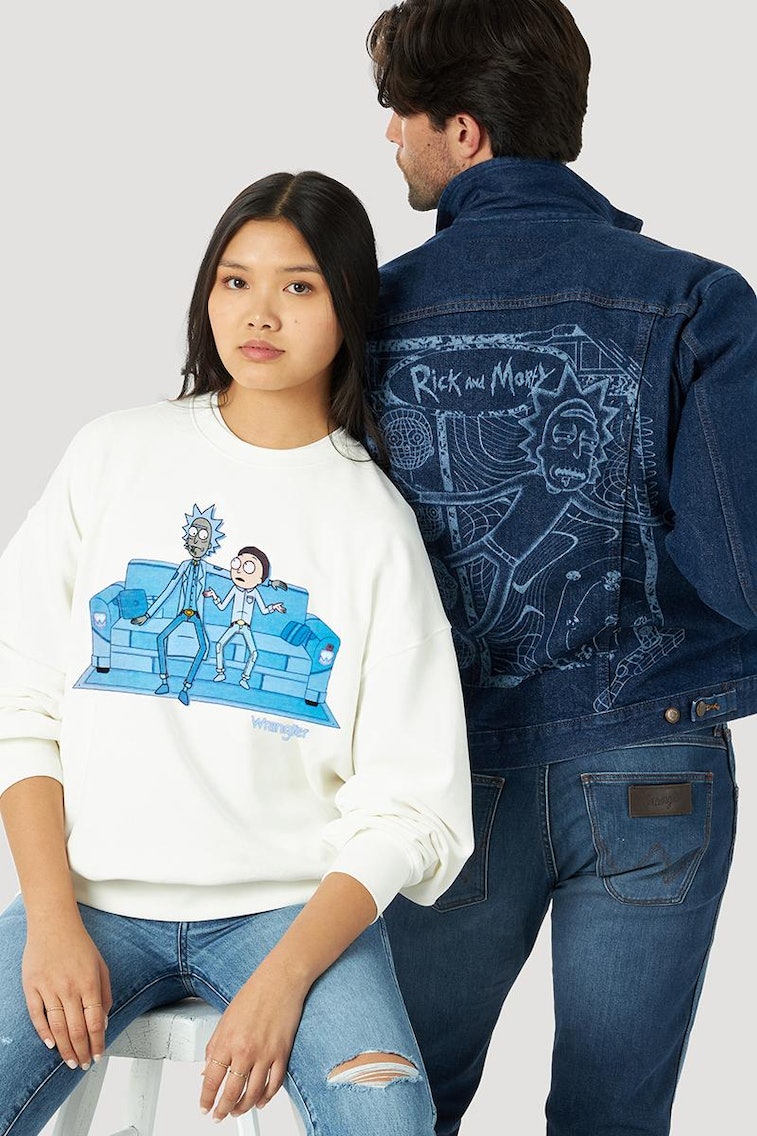 Wrangler Denim has announced the second installment of its Rick and Morty collaboration, which sees a T-shirt, hoodie, sweatshirt, and denim jacket decorated with the main characters from the Adult Swim show. Pickle Rick doesn’t make an appearance on the apparel, but Canadian Tuxedos and neon graphics make up for it.

Rick and Morty’s first partnership with Wrangler came in 2020, when the brand was jokingly mentioned in the season four finale of the show. In the episode, Rick and Morty use an NX5 Planet Remover laser that’s fictionally “sponsored by Wrangler” — and a real collaboration with the denim company followed suit. The initial collection from the two even referenced the finale episode, featuring a lasered denim jacket and a tee with hand-painted artwork of the NX5 laser.

"With an original collection that sold out twice last year, the Wrangler team is excited to continue to grow our roots in pop culture with another unique collaboration with Adult Swim's popular adult animation series, Rick and Morty," Holly Wheeler, vice president of global brand marketing at Wrangler, told Input. "Given that lasers have long been a part of our denim production, we loved the organic mention of NX-5 Planet Remover in the season 4 finale and have included creative design elements like a laser-etched jacket in this fan favorite collection in time for the holiday shopping season."

Get schwifty — While the next installment between Wrangler and Rick and Morty doesn’t nod to any particular episode, it puts the show’s namesake characters into typical settings. A white sweatshirt sees Rick and Morty sitting on a patchwork denim couch — dressed in Canadian tuxedos — most likely watching interdimensional cable. Matching blue Wrangler branding appears underneath the graphic.

A black hoodie shows a much more chaotic, albeit classic, Rick and Morty scenario. Its multicolored graphic shows the duo floating along with different planets, with a pink Wrangler logo blending into the turbulent scene. The piece pairs nicely with the collection’s standout design, a dark denim jacket featuring a laser-etched Rick. A long sleeve tee bears the same motif, but in fluorescent shades.

More to come? — “As an iconic heritage brand, Wrangler has a strong history in pop culture, and we love to embrace opportunities to reach new fans when we’re naturally integrated, including Adult Swim’s Rick and Morty and the organic mention of Wrangler denim being indestructible by the NX-5 Planet Remover in the show’s season 4 finale,” said Holly Wheeler, vice president of global brand marketing at Wrangler, in a press release.

Wheeler mentioned that as Wrangler approaches its 75th-anniversary celebration, more partnerships are to be expected, blending the denim brand’s “western roots with modern culture.” While another Rick and Morty collection could be on the way, it seems Wrangler will be branching out to other pop culture icons — any suggestions?

This article was originally published on Oct. 20, 2021