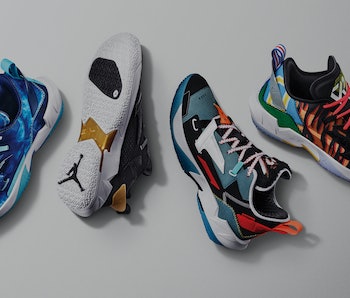 The NBA's reigning agent of chaos has a new team and his fourth signature sneaker. Jordan Brand has revealed Russell Westbrook's Why Not? Zer0.4, which continues to be the wildest basketball shoe in the game.

For performance, the sneaker features a double-stacked Zoom Air unit, following the lead of the Nike ISPA Road Warrior and Zoom Double Stack in its ravenous approach to cushioning. But style is just important to Westbrook, which is why he's tapped Facetasm for one of the four debut schemes.

The Japanese streetwear brand applies its signature smoky blue and red color treatment to a pair of the Why Not? Zer0.4 with a terry cloth tongue. "We make things from a place of freedom and fun," Facetasm founder Hiromichi Ochiai said in a release. "This latest collaboration is a testament to that way of thinking. We also wanted to create something that people would be moved by, reflecting the spirit of that phrase, 'Why Not?'"

Another aggressive sneaker — Westbrook is known for a borderline violent style of play — dunking, blocking, and rebounding without abandon. His Jordan line has complemented his game, as well as his love for fashion, with aggressive lines and bold clashes of colors and prints. The two Zoom Air units piled on top of each other would fit in well with his established aesthetic, but Jordan Brand has hidden them away inside the midsole.

The rest of the shoe, however, is far from subtle. Zig-zags, contrast stitching, and conspicuous straps feature throughout the upper. In addition to the Facetasm edition, the Why Not? Zer0.4 debuts in an aquatic blue "Family" treatment that dares you to drip or drown. Another pair, dubbed "Upbringing, overloads the senses with prints that include tiger stripes, the number "0" in the colors of Westbrook's alma matter UCLA, and red, white, and blue stripes for his new team, the Washington Wizards. A final black, white, and gold variation is only muted by comparison — a rarity when gold's involved.

Another fleece to covet — Instead of matching the kicks, the Facetasm apparel only adds to the clash with red and green tracksuits, jackets, hoodies, and T-shirts. The highlight of the bunch is an asymmetrical and oversized terry cloth jacket with pink, green, blue, and black panels. It looks a hell of a lot like fleece, so why not consider it in the category of winter's best mid-layer.

Jordan will roll out the sneakers and apparel beginning with the "Upbringing" Why Not? Zer0.4 on January 6. The black-and-gold version is next on January 14, followed by the Facetasm collab on January 27 and, finally, the "Family" pair on February 25. Meanwhile, the clothing will release January 14.

It's a lot to keep up with — but then again so is Westbrook.