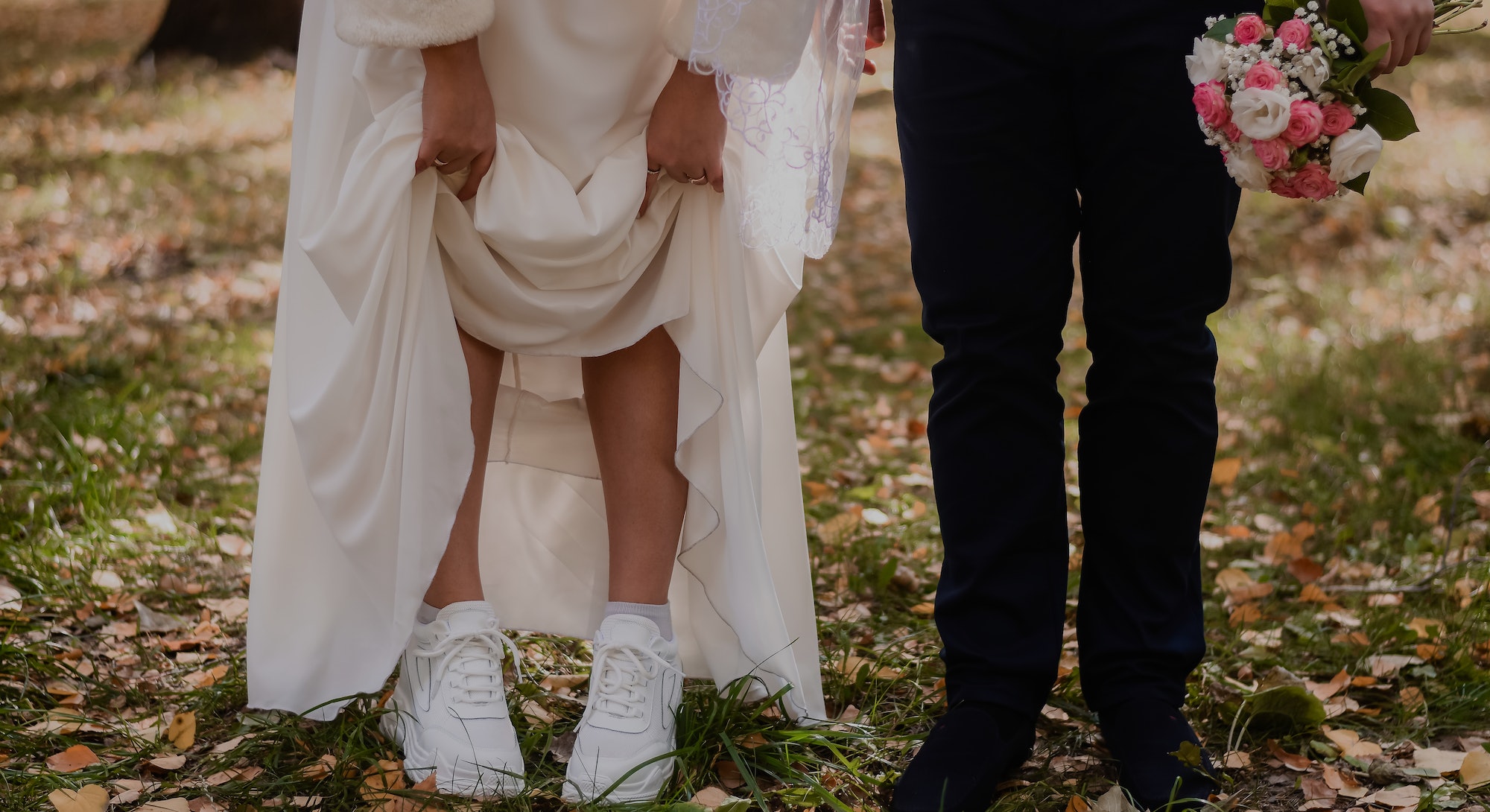 Sneakers have become a love language in and of themselves.

Many people will look to see what’s on someone’s feet before making eye contact, friendships can be tested and strengthened over who is willing to enter a draw or raffle for you, and respect is often paid based on how many holy grail sneakers are in your closet. Romantic relationships are even founded upon a mutual love of shoes and nurtured with couples’ fit pics and matching sneakers. Some couples’ love for the lifestyle runs so deep, in fact, that they’re willing to incorporate it into their weddings.

Serena Williams contributed to the trend with Swarovski-crystal embellished Nike Cortezes, and Off-White label even sent Bella Hadid down the runway in a formal gown and sneakers as a tribute to the late Virgil Abloh. As the popularity of sneakers continues to spread across various industries from food to cars to high-stake auctions, many sneakerheads and hypebeasts are throwing traditional rules out the window when it comes to their wedding day wardrobe.

After careful searching, Alexandra Ulrich, a lifetime sneaker enthusiast, knew right away that she’d found “the one” — a white pair of Nike SF Air Force 1s. Having decided early on to ditch traditional heels, she felt completely sure about her choice to wear more casual shoes during her ceremony.

“It’s an important part of me, my personality, and the things I love,” Ulrich tells Input. “It’s my wedding day, and I wanted to be surrounded by things I was excited about. Sneakers were at the top of the list.”

For richer or poorer

According to the research database IBISWorld, the wedding industry’s growth rate decreases by seven percent every year, and a 2014 study showed that couples who spend more than $20,000 on their wedding are 46 percent more likely to get a divorce than those who spend less. Meanwhile, revenue from sneakers saw a $30 billion increase from 2012 to 2021, with the industry expected to grow 10.5 percent in 2023 and by nine percent each year after. But even though wearing sneakers during a wedding may seem like dressing down, that doesn’t mean all casual footwear comes cheap.

Some of the most esteemed luxury houses including Gucci, Louis Vuitton, and Dior have partnered with sneaker or streetwear brands or have created sneaker silhouettes of their own, offering a more elegant and elevated look. Because of these high-fashion cosigns, the collaborative products can cost as much, or even more, than formal heels or dress shoes. The Dior x Air Jordan 1 Retro High is listed for up to $27,000 on StockX, while a loafer or dress shoe from the luxury brand won’t cost more than $1,500 on its site.

It didn’t just happen by accident or to throw off conservative guests.

Not all sneakers need a high-fashion name attached to make them valuable, though. A general release Air Jordan 1, one of the most popular wedding silhouettes among sneakerheads, retails for $180. Resale prices for specific color variants can be significantly higher, such as the Air Jordan 1 Retro High “Bred.” It has an average resale price of $1,823, further exemplifying the blurred lines between streetwear and luxury.

The incorporation of sneakers into wedding ceremonies didn’t just happen by accident or to throw off conservative guests. According to Shelley Brown, senior style and fashion editor at The Knot, an emphasis on personalization is a major factor. As more couples leave behind the idea of one “right” type of dress or footwear, “they feel more comfortable opting for wedding attire that feels less formal and traditional,” she tells Input.

One in five couples chose a casual wedding dress code in 2019, compared to 14 percent who did the same in 2010, according to The Knot. Nike, Vans, and Converse all have programs in place that allow shoppers to customize a sneaker’s every detail — a handy feature for couples who want to incorporate monograms or their wedding color palette.

Instagram’s #sneakerwedding hashtag has more than 1,000 posts featuring couples and guests flexing kicks on the big day. Pairs range from classic black and white Converse All Stars to the often dressed-up Air Jordan 11. One groom and his groomsmen even wore "Bone" Yeezy Slides (priced up to $659 on StockX) much to the chagrin of the sneaker community. Some brides opt for customized pairs that go beyond what brands can offer and enlist the help of services such as Solely Original and BLVD Custom for more glitz and glamor.

“Those more restrictive and rigid rules surrounding wedding attire kind of fall away.”

Although the blueprint for “the perfect wedding” varies depending on who you ask, the expectations of its dress code have largely remained the same until recently. The standard has been a white dress for the bride, black tuxedo for the groom, and formal footwear for both until the recent cultural shift toward personalization. And while sneakers were once relegated to athletics or certain subcultures in the ‘80s and ‘90s, they’re now a widespread sight in many aspects of daily life and often a sign of wealth and access.

“We’re seeing more people wanting their wedding to be a reflection of their personal taste,” Brown says. “Which means that those more restrictive and rigid rules surrounding wedding attire kind of fall away.”

Journalist Ashley de la Mode always knew she wanted an untraditional wedding. In 2021, she and her husband got married in a quiet courthouse ceremony in New York City wearing matching Adidas tracksuits with her in Adidas Stan Smiths and him in Air Jordan 12s. De la Mode admitted that her wedding was “shocking to the older generation,” but she doesn’t regret the decision to dress unconventionally and doesn’t think other couples should either. “[People] look at [weddings] like a ceremony they have to follow,” she says. “They’re following the leader, but what leader? What are they following? They’re following tradition, what they’ve been told, and what they see on Disney.”

Ulrich notes that there’s nothing wrong with a standard style of wedding, but says, “If that type of wedding feels like putting on a costume, there are so many other cool and fun things you can do to make your wedding a memorable and happy day that you’re proud of.”

Michael Santos, a self-proclaimed sneakerhead, opted for black and red Air Jordan 11 “Bred” sneakers during his reception and equipped his groomsmen with black-and-white Air Jordan 1s. “I could tell that [some people] did not understand it and were confused as to why I was wearing basketball shoes,” he says. However, as a long-time sneakerhead, he said many others “expected” him to wear a fresh pair of kicks on the big day.

Ultimately, weddings have the potential to be as personal as the clothes you wear every other day, and that’s the beauty of it. Rigid marital traditions are being traded for a more personal reflection of happiness — which for many people, includes a fresh pair of shoes. And while it’s great to be able to use sneakers and streetwear as a form of self-expression, as a guest, make sure you double-check the bride and groom’s preferences before you show up underdressed.