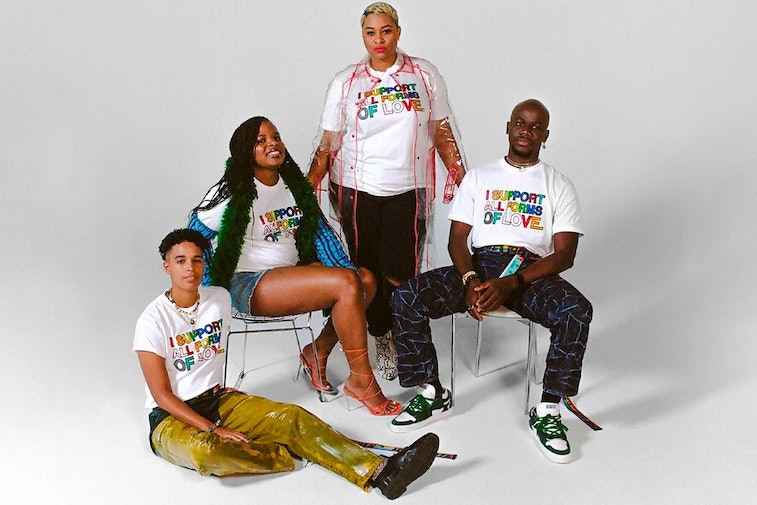 Between his position as Louis Vuitton, his notoriety at Off-White, and all the collaborations in-between, Virgil Abloh carries a wide-spanning influence. Now, in partnership with Black queer feminist organizer Trinice McNally, Abloh is using his platform for good: His latest Off-White collection celebrates LGBTQIA+ and non-binary activists while also raising funds to support the Black LGBTQIA+ Migrant Project (BLMP).

Titled “I Support All Forms of Love,” the capsule marks Abloh and McNally’s second time working together. McNally, who is the founding director of the Center for Diversity, Inclusion & Multicultural Affairs at the University of the District of Columbia, originally partnered with the designer after he saw her wearing a machete strapped to her chest with an Off-White belt during an interview and reached out. Their first collaboration, named “I Support Black Women,” released in March and aimed to uplift and center diverse Black women organizers contributing to social change.

Off-White goes rainbow — Off-White’s next offerings may seem off-season, considering Pride Month is June. Yet the garments arrive just at the start of LGBTQIA+ history month, celebrating the community and benefitting it too. 100 percent of the proceeds from the two-piece capsule will be donated to BLMP, helping the grassroots project fund community-building, political education, and access to direct services.

A white T-shirt, featuring the capsule’s slogan “I Support All Forms of Love,” aptly flaunts the colors of the Pride flag, representing the vast spectrum of gender and sexuality. Off-White’s signature belt, now done up in rainbow, reflects the same messaging — with some added branding for clout, of course.

In the “I Support All Forms of Love” campaign, shot by Neva Wireko and styled by Ian McRae, a diverse group can be seen wearing the collection in their own ways. Furry boas, gold Off-White earrings, beaded chains, and colorful jackets all accessorize the prideful Off-White pieces. “For queer people, fashion has always been used as a [powerful] tool,” McNally told The Face. ​“It’s like a safety and a way that we really get to show our gender expression. It’s not just clothing.”

Support where you can — Abloh and McNally’s “I Support All Forms of Love” capsule is available now on Off-White’s website, where both pieces retail for $290. As mentioned before, all proceeds from the collection benefit the Black LGBTQIA+ Migrant Project — but if a nearly $300 tee or belt is out of budget, Abloh still encourages you to donate and amplify the project’s message. Let’s hope his influence can sway his hypebeast following, which is notoriously riddled with bigotry.