“[The accusations] are a hate-filled attempt to discredit my work. The inspiration for my collection comes from the DNA of Louis Vuitton.” 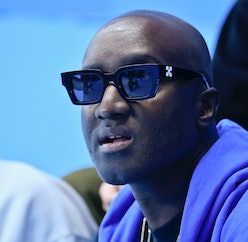 After being called out directly by Walter Van Beirendonck for allegedly copying his designs, Virgil Abloh has finally responded. Through a publicist, Abloh flatly denied the accusations pointed at his latest Louis Vuitton show and cited in-house inspiration for the collection.

"Walter Van Beirendonck’s claims are completely false," a publicist told Highsnobiety. "They are a hate-filled attempt to discredit my work. The inspiration for my collection comes from the DNA of Louis Vuitton, including the 2005 Louis Vuitton menswear show, and it was clearly outlined in the notes distributed to the press when the show began. This is yet another instance of false equivalence to try to discredit me as a designer."

What's the beef? — Many onlookers noticed a similarity between Abloh's pieces with an oversized plush figure attached and a jacket from Van Beirendonck's FW16 collection. Van Beirendonck himself commented on the apparent plagiarism and used the opportunity to sound off on Abloh.

"It's very clear that Virgil Abloh is not a designer," Van Beirendonck said. "He can’t create something of his own season after season, and that is painful. As for me, throughout all these years in fashion, I have patiently built up a signature language. That language is mine. It’s me. And he takes it, makes a copy of it. You can reinterpret things, do them in a different way. But this is just embarrassing. Meanwhile, Abloh gets a lot of money. He’s the one who cashes in."

Van Beirendonck did acknowledge copying is rampant in fashion, but added: "...not like this. Not on that level, with their budgets, their teams, their possibilities. That’s what is shocking to me."

This isn't the first time Virgil's been accused — Accusations of plagiarism have followed Abloh throughout his career. He's been charged with taking designs from a much smaller label called Gramm and Colrs, as well as an aspiring designer who showed Abloh his sunglasses. Even his Nike "The Ten" collection, which may be his most beloved and high-profile creation, has been sullied by accusations that it was stolen from a designer who interviewed for a job at Off-White.

Abloh, whose background is in architecture and is atypical for a designer of his stature, has also set himself up for such charges. He's spoken of his "3-percent approach" to design, which involves taking an existing idea and tweaking it by just 3 percent. The question is, is three percent enough to call it his own?

And it isn't his first denial — Abloh has largely ignored the charges of plagiarism throughout the years and moved on without a problem. He did, however, respond directly to the Gramm and Colrs controversy and was similarly dismissive. In a New Yorker profile, Abloh reduced the similarities to "basically the use of a yellow fabric with a pattern on it" and added sarcastically, "Ring the alarm."

Abloh may be too big to fail at this point, but the public perception of him may be worsening now more than ever. He was criticized for complaining about his and his friend's stores being looted during the Black Lives Matter protests and then made things worse for himself with an Instagram post that made it look like he donated just $50 to the cause. And even though he clarified that his donation was much larger, it didn't stop "two Virigils" (i.e. 50 x 2) from becoming a meme.

Compounding the situation is his Off-White design team, which, going by a photo he shared last year, appears to be all-white. 2020 has become somewhat of a year for reckoning with Abloh, but will it be enough to knock him off his post?