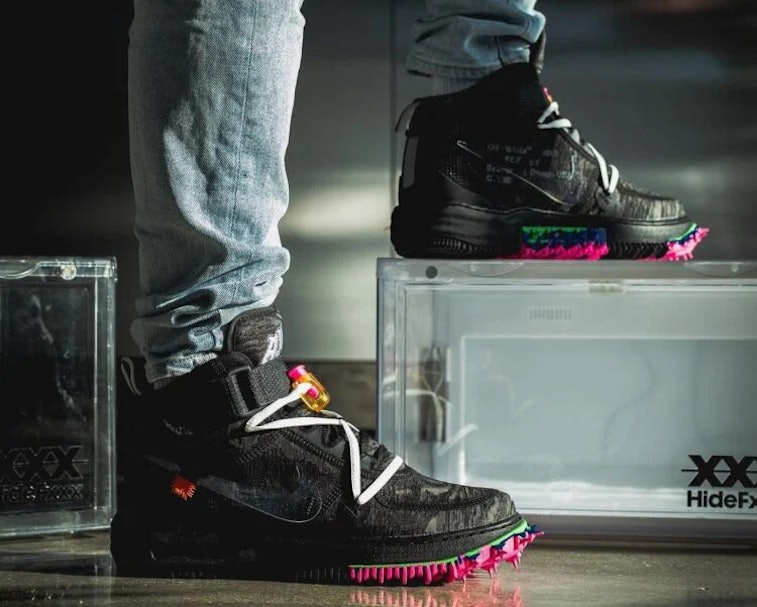 Virgil Abloh’s influence isn’t going anywhere. Many of his collaborative projects are resuming their releases following his passing last year, including an Oxford dress shoe made with a heritage formal footwear brand and a Nike Blazer Low. Joining them soon will be another Off-White x Nike collaboration in the form of an Air Force 1 Mid.

While the collaboration, first revealed late last year, was initially met with some hesitation, the design might’ve just been ahead of its time. But as avant-garde footwear commands more attention in the world of sneakers, the Off-White and Nike hybrid fits right in.

Everything is black and white — Two color options dress the sneakers, the first coming almost entirely in black. Inky shades dress the uppers, soles, and most of the detailing breaks up the dark hues with a mix of textured materials. The Swooshes are clear and appear to be stitched onto the shoe, while pops of orange, green, and pink contrast on various tabs, lace toggles, and Abloh’s signature plastic hang tag. Extra white laces sit on top of the regular lacing system — and boldest of all are soles equipped with neon track spikes and orange Air bags.

The second half of the duo is similar to the mock-up first shared by Abloh on Instagram in October. The upper comes in a pale gray, accompanied by darker ankle straps and overlaid laces. Stitched, clear Swooshes are again present with the neon track spiked outsoles. Both sneakers feature the signature Off-White Helvetica messaging and Nike Air branding on the heel. Nike then adds a bit more flair with an embroidered and atypical “Air” graphic coming on the tongue.

If you were expecting a minimalist Air Force 1 Mid or were part of the group that called these “trash” back in October, it’s okay to admit this collab isn’t the one for you. But if you’ve been a fan of Abloh’s for a while, the experimental upgrade may just be what your sneaker collection needs: a reimagined version of a classic. “The shoes are a mere by-product of trying to define a larger idea of why shoes are technically meaningful, emotional & relevant. etc,” Abloh wrote then on Instagram.

The Off-White x Nike Air Force 1 Mids are reportedly due to release May 23 on the SNKRS app and at select retailers for $185. Considering all the bells and whistles that come with the kicks, it seems like a fair price to own one of Abloh’s latest and greatest yet.