“It's very clear that Virgil Abloh is not a designer.” 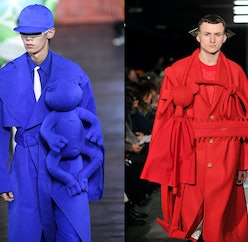 After Virgil Abloh showed his Louis Vuitton SS21 collection that appeared to borrow heavily from Walter Van Beirendonck, the Belgian designer has responded. Van Beirendonck made a cryptic post on Instagram featuring a cutout T-shirt from his FW20 collection with the message "I hate copycats." While not mentioning names, the caption read, "Please get your own concept."

But in an interview with the Belgian publication Knack Weekend, Van Beirendonck didn't mince words, saying, "It's very clear that Virgil Abloh is not a designer." From there, he picked apart Abloh with precision and the expertise he's earned as a member of the Antwerp Six.

"He can’t create something of his own season after season, and that is painful," Van Beirendonck said. "As for me, throughout all these years in fashion, I have patiently built up a signature language. That language is mine. It’s me. And he takes it, makes a copy of it. You can reinterpret things, do them in a different way. But this is just embarrassing. Meanwhile, Abloh gets a lot of money. He’s the one who cashes in."

The offending design — One of the standout pieces from Abloh's most recent runway show was a royal blue overcoat with a giant plush figure hanging off of it (pictured up left). The problem is it looks just like a piece from Van Beirendonck's FW16 collection (right).

"Copying is nothing new," Van Beirendonck said. "It’s part of fashion. But not like this. Not on that level, with their budgets, their teams, their possibilities. That’s what is shocking to me."

Abloh basically admits it — Abloh hasn't exactly set himself up to deny such criticism. He's spoken at lengths about his "3 percent approach" to design, which involves taking an existing object and tweaking it by just 3 percent.

That ethos is readily apparent in his collaborations with Nike and Ikea, but it's more insidious when he's caught stealing from other designers. Over the years, he's been accused of stealing from the much smaller label Gramm and Colrs, as well as the famed artist Lucio Fontana. A designer who interviewed for a job at Off-White also accused Abloh of ripping off his own designs for the Nike "The Ten" collection, and another young designer who showed his sunglasses to Abloh saw those designs imitated soon after.

Abloh directly responded to the controversy with Gramm and Colrs in a New Yorker profile and denied that he had seen the design before. He reduced the comparison to "basically the use of a yellow fabric with a pattern on it" and sarcastically said, "Ring the alarm," before going on a Kanye West-esque rant about social media, the human condition, and negativity.

It seems unlikely that Abloh will stop stealing from other designers, but the public perception of him has been skewing negative in 2020. From his botched response to the Black Lives Matter protests to lazy, possibly stolen cover art for Pop Smoke's posthumous album, the criticism is piling up. And that was before a designer as accomplished as Van Beirendonck called him out.