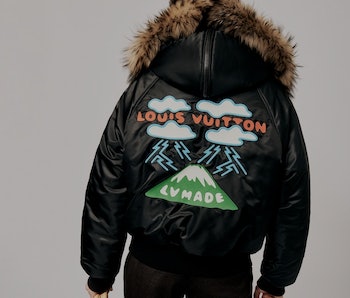 Last month, Coach collaborated with the husk that is Bape following the departure of its founder. It was abominable. Today, we're getting a high fashion-streetwear palette cleanser with the reveal of Louis Vuitton's collaboration with Human Made.

Virgil Abloh tapped Nigo, who left Bape in 2013 and turned his attention to Human Made, to work on the LV² capsule. In a refreshing development, the Human Made logo appears nowhere in the collection. Too often, collaborations end up as a half-baked composition of the involved logos. LV², however, puts the focus on Nigo's toying with some of Louis Vuitton's most well-known motifs.

Smarten up — "What people might be most surprised by is that for two guys known for streetwear history and ability, the collection is completely the opposite," Abloh told Vogue in announcing the capsule. "That was our starting point: Let’s not do the expected. Let’s not put streetwear in a box. That’s the epiphany within the collaboration."

LV² isn't entirely devoid of streetwear, with inclusions of denim, a hooded bomber, and a healthy dose of graphics. But the focus is on tailoring: three-button blazers feature throughout, and a pair of suits have been done up in the LV Damier check. A tweed blazer features gorgeous "LV²" embroidery on the breast pocket. For good measure there's also sharp suiting, ties, scarves, and overcoats — bolstering the case for getting dressed up as the ultimate flex.

Even a hypebeast should have his day in a suit, and Supreme has provided great offerings in recent seasons. LV² reminds us that there are levels to this, and luxury houses still do suiting to die for.

Throwing steetwear a luxurious bone — For those less interested in suiting, an aversion I can't condone, there's still plenty of fun to be had. A dazzling denim top and bottom make patchwork out of LV's Damier check and monogram. (If it isn't made in Japan, we riot.) The bags are where the streetwear connection is most apparent, taking Nigo's drip effect from Icecream and applying it to the French house's venerable leather goods with a similar clash of patterns.

Abloh said of the ice cream effect: "I thought, 'What if we made that playfulness a little more serious and merged it with the Louis Vuitton signature?'" He also described the fur-lined hooded bomber, which features a cartoonish Mount Fuji graphic, as representing the latter in a collection that portions "more mature pieces with youthful pieces."

LV² is a hit — Abloh will never fully silence his critics, but in teaming up with Nigo he's shown the collision of streetwear and luxury at its finest. The touches of a godfather of streetwear and one of fashion's most esteemed houses can be felt in each of the designs. "Grown-up" attire gets a splash of youth, and the younger fare is elevated with materials and detailing.

Streetwear will never really die. Like subcultures that blew up before it, e.g. hip-hop or rock & roll, it'll only evolve. Abloh acknowledged as such in the Vogue interview while following up on his controversial prognostication of streetwear's death. Calling himself a novice, he said he didn't intend to be polarizing and was just riffing in his kitchen.

"If you speak to anyone that’s been in streetwear for the last 15 years, it’s always had this sort of nine lives, dying and coming back, and dying and coming back," Abloh said. "...Partially what I meant that 'it will die' is that new things like tailoring from guys like Nigo and me will be born from the regeneration of it."

That regeneration shows streetwear can be just as exciting when it's reached mass appeal.