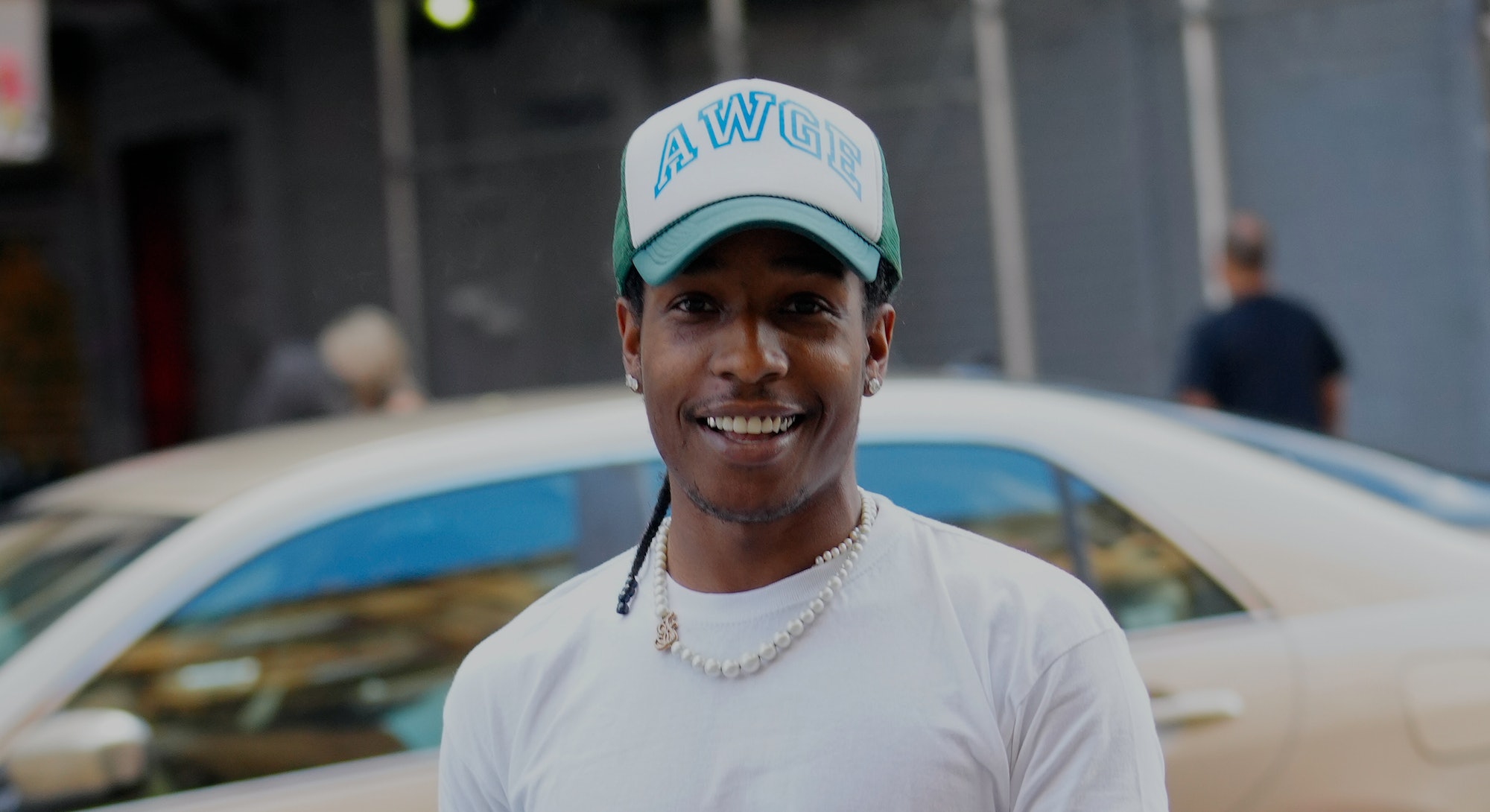 Minimalism is over, the Y2K renaissance declares.

After nearly two years of living through a pandemic, consumers are hungry for kitschy graphic tees, pants with writing scrawled across the ass, and hats that argue “long live bad taste.” We’re here for a good time, not a long time, right?

Much like Ben Affleck and JLo, Paris Hilton, and shield sunglasses, trucker hats and baseball caps are hot again. Bella Hadid has revived the Von Dutch craze, while Rihanna has been stepping out in vintage Esso caps. Cashing in on the nostalgic trend, even luxury brands like Gucci and Louis Vuitton have remodeled the headwear — defined by its graphic front — and marked them up at unbelievable prices.

Hats in general, however, are not necessarily new to streetwear. For decades, baseball caps have proudly been worn by athletes, rappers, and celebrities (including half of Bennifer, Ben Affleck) to rep their favorite sports teams, cities, and brands. Similarly to trucker hats, the caps combine comfort with expression, allowing wearers to wear their hearts on their heads at any time, in any place.

“The hat itself is a vehicle of self-expression,” says Max Nelson, founder of Hood Hat. Down to its colors, how it’s worn, and what kind of hat it is, the accessory “represents the collision of music, art, sports, and fashion, while also empowering their wearers to tell their story,” he tells Input.

Hood Hat, which Nelson founded in April of 2018, was created after he noticed a vacuum in the market for luxury customized baseball hats. “I saw people wearing $6, $7, $800 sneakers and they’re walking around with $15 hats,” Nelson says, pointing out the disparity in quality. Rather than having his hats top off an outfit, Nelson wanted the accessory to inspire one: “The hat needs to talk to the shirt, which talks to the pants, which talks to the shoes… It needs to be a coherent story,” he says of building an outfit.

No fit is complete to Nelson without the expressive qualities of a hat, which is why Hood Hat’s products come emblazoned with plenty of colors, materials, and hyper-local graphics. “The colors and the places [our hats] represent to the consumer helps complete the [outfit] hookup,” he says. Taking inspiration from Sports Specialties hats — as seen on famous faces like Dre and Ice Cube, Nelson recalls — Hood Hat offers headgear repping nearly every hood in America, and some international areas too.

Such specificity is what consumers love about Hood Hat. Justin Fields, the starting quarterback for the Chicago Bears, donned a Chicago South Loop hat from the brand; not long after, fans were able to find the cap by simply searching “South Loop hat,” Nelson says. “There’s nobody else making a South Loop hat except for us, and that’s how consumers found us.” A similar phenomenon occurred when Hood Hat made a custom “Marcy” hat for Jay-Z; the cap later became a best-seller through Google searches.

Yet as Nelson mentions, a hat can be loved not just for what it says, but through its color and style. “When I first got into hats in the early ‘90s, I was buying sports hats for teams that I didn't follow,” he says. “I just liked the color and how it went with my outfit.” Sometimes Nelson notices consumers doing the same — surely Jay-Z fans copped a cap without being from Brooklyn.

To Nelson, a hat is considered a more appreciated accessory than sneakers: “[A hat is] some of the most valuable space [of an outfit]... you don’t have to work to see it,” he says. Hood Hat’s eye-catching potential later caught the attention of Rowing Blazers founder Jack Carlson, who saw one of the brand’s designs on social media through a mutual friend. A collaboration blossomed between Hood Hat and the preppy streetwear label, resulting in new hoods and colors to represent.

With customization and expression at top of mind, Nelson is now focused on broadening Hood Hat’s offerings. New materials and different cap styles are on the way, he says, excited about appealing to a wider audience. There are so many stories left to tell, and Nelson is determined to broadcast them on his hats.

Montana Sullivan inverses Nelson’s process, assigning stories to hats as she finds them. An advocate for thrifted and vintage fashion, and founder of Besos Vintage, Sullivan primarily buys her caps second-hand. “A lot of [newly produced] hats are taking inspiration from vintage hats,” she tells Input, emphasizing that she goes straight for the source.

Vintage caps are “bizarre,” Sullivan says, mainly because they weren’t made for fashion in the first place. Most were produced as advertisements for brands or now-defunct companies, she notes, leading people to adopt the hats in a practical way that transcends trends. The origin of trucker hats has a very rural association, per their name, offering an inexpensive, comfortable headwear option.

Sullivan herself embraced the fashion for its functionality, first wearing the hats to protect her head from getting sunburnt. Even now, when restoring her new home, she dons a cap to keep paint and other staining materials out of her hair.

“My caps are worn in, not worn out,” Sullivan says, insisting that people “should wear the shit out of their clothes.” Rather than treat the hat trend as a fleeting style, people should incorporate it into their personal look, she says. With the wide range of offerings — either found secondhand or through custom caps — there’s plenty to choose from. You might find “more longevity in vintage pieces” because of their quality, though, Sullivan notes. “If they’re still here, chances are they’re here to stay.”

Once Sullivan incorporated hats into her outfits, they quickly became a key part of her personal style, she says. Her Instagram profile, which showcases photos of her wearing everything from vintage caps to a Brain Dead hat, cements this. “I love mixing masculine and feminine pieces,” she says, “so I feel more myself when I have pieces like a hat balancing out my outfit.”

Sullivan thinks the uptick in unisex styles, as well as the return of ‘00s and athleisure trends, have helped bring the trucker and baseball caps back into popularity. “Last year, people started to thrift a lot more, and there was a lot of demand for old Von Dutch hats,” she says. Hats are also “accessible,” she adds, citing their low price point and easy styling. “It’s a way for people to add another layer to their look,” Sullivan says — and if you have the money to afford the $760 luxury Louis Vuitton iteration, “go for it,” though she thinks “it’s a bit outrageous.”

Like their practical roots, trucker and baseball hats are meant to be a carefree, universal style: An addition to an outfit that represents what the wearer likes. Whether that be a certain hood, a color, or in Sullivan’s case, a particular Lay’s Chips hat, the return of the caps signals a more individualistic approach to fashion — hats off to that.