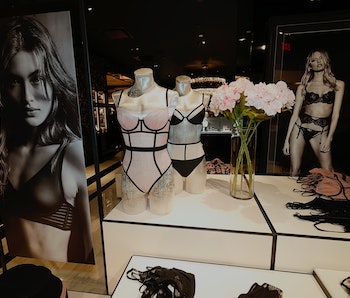 Victoria’s secret is out: The lingerie brand is joining the metaverse, according to a series of new trademark filings reviewed by trademark attorney Mike Kondoudis. Soon enough, downloadable virtual goods, NFTs, and virtual retail services and entertainment are expected from Victoria’s Secret. Digital renditions of its bras and underwear will presumably dress an avatar within the brand’s virtual space.

Nike, Adidas, and New Balance have already joined the metaverse, offering similar digital clothing and experiences — yet it’s fair to point out that none of them offer virtual intimate apparel. Victoria’s Secret could be the first large-scale lingerie retailer to enter the metaverse, beating out competitors like Rihanna’s Savage x Fenty brand that have been praised for their inclusivity (something long lacking from the mall store). This digital expansion could be a chance for Victoria’s Secret to model diversity — something it's only just started to do by offering larger sizes and hiring plus-size models — and it’s worth asking who the target demographic is for online-only lingerie.

Byte-sized bras — According to Victoria’s Secret’s trademark filings, the brand plans to offer NFTs alongside “information, photos, images, videos, recorded footage, highlights, and experiences in the field of fashion, clothing, fashion accessories, and style.” Given that the brand was once famous for its fashion shows — which were canceled in 2019 so VS could “rethink” its notoriously blonde and skinny image — its digital collectibles could revolve around past runway events.

The trademark filing also mentions that Victoria’s Secret will venture into “photos, images, videos, and recorded footage for use in brutal environments and virtual fashion shows,” meaning a digital rendition of the show, including an opportunity for people’s avatars to walk on the runway, is also a possibility. Whether the virtual fashion show will bring more inclusivity to the VS runway has yet to be seen — it’s just as likely that people emulate the brand’s previous models, or “Angels,” online.

Is digital diversity achievable for VS? — Moving a lingerie retailer to the metaverse is a fickle subject, especially on the topic of body image and diversity. For many consumers, the internet has welcomed unrealistic filters, indecipherable Photoshops, and constant commentary on what people’s bodies — especially those of women — should look like. Victoria’s Secret has to ensure its digital world celebrates diversity instead of adding to artificial body image issues. Is that possible in an artificial space?