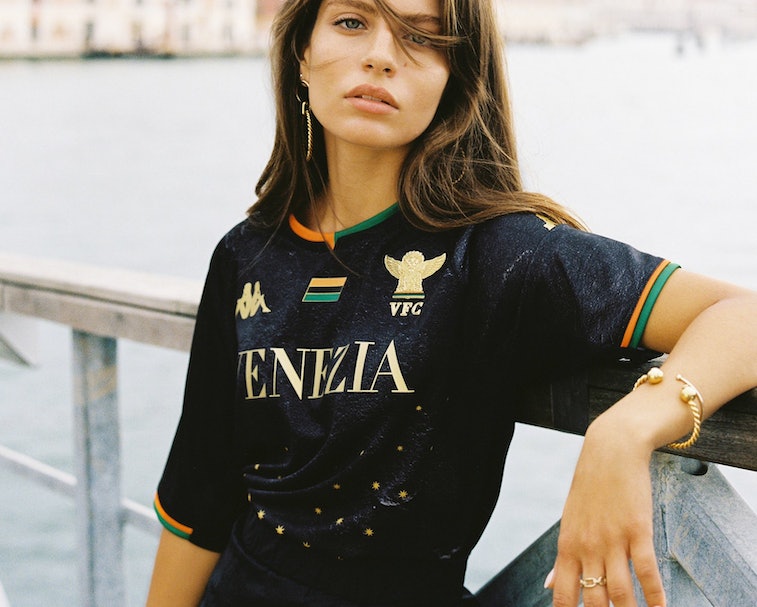 Venezia FC has climbed back to the top flight of Italian football for the first time in nearly 20 years. Suffering through financial difficulties, the club technically fell out of professional soccer by being relegated to Serie D, fourth in the pyramid of Italian associations. And in its first season back in Serie A, Venezia FC will have the best kits in the league.

Kappa has unveiled its home shirt for Venezia FC, a striking black jersey with the famous stars of Basilica di San Marco arranged into a “V.” A faint texture on the shirt’s base takes inspiration from Venetian walls near the lagoons around Venice, while the gold is a nod to city’s historical churches and art. In addition to the usual chest placement, Kappa’s iconic logo is also repeated on the shoulders while the club’s name replaces that of a shirt sponsor.

The jersey harkens back to the form’s heyday of the ’90s, when Kappa was responsible for some of the best shirts in the game. Appreciation for the retro aesthetic is so strong that Venezia FC has already sold out of the jersey through the club website — but trust you’ll have more opportunities to cop as the season goes underway.

Venezia has been killing it — While a return to top-flight soccer brings new eyes to the club, Venezia FC already has a strong track record for its uniforms. In the 2020-21 season, its last with Nike, the club rocked bangin’ orange, green, and black stripes on both its home and away kits.

This year’s and last’s kits were designed by Fly Nowhere, a design agency that’s also responsible for dazzling shirts within FIFA and made on smaller scales for some of Europe’s top clubs. And the away kit it produced for Venezia FC, which was just unveiled today, may be even better than its home counterpart.

A cream-colored shirt is covered in a triangle pattern with a gradient that transforms horizontally from orange to black and then green. That jersey isn’t sold out yet, and if you’re as transfixed by it as we are, you better head to the Italian club’s store before it inevitably sells out as well.