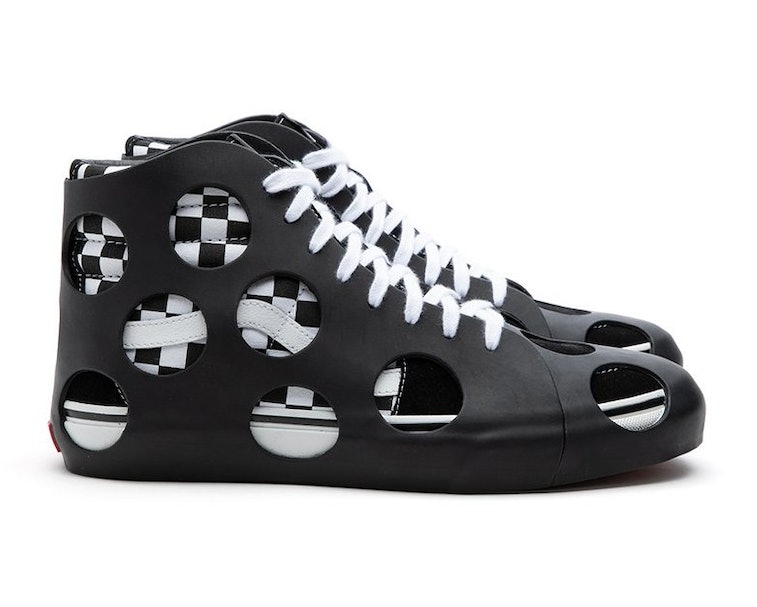 In the excessively crowded space of sneakers, one way to get noticed is to get weird. We see it from the top down, from Nike's over-the-top Chunky Dunkys and shaggy Grateful Dead Dunks, to Tabi-toed Reeboks and an unreleased Yeezy that could have been excavated from a coral reef. This peacocking approach is risky though — think how quickly the quirky kid can go from funny to plain strange — and Vans may have bitten off more than it can chew with a Swiss cheese-looking Sk8-Hi.

The perpetually cool high-top skate shoe has been made less so as it's enshrouded by a bizarre and holey rubber cage. Not only is it a trypophobe's nightmare, but it should haunt anyone who's held a place in their heart for the sneaker in its more than 40-year-old history. Sometimes you just don't mess with the classics, and the Sk8-Hi seems to cry out for help in its rubber prison.

Thank heavens it's removable — Vans has churned out two versions of its abominable Sk8-Hi, both of which allow for the cut-out cage to be removed. There'd be no point in doing so for the black-and-white checkerboard variation because you can already buy the shoe sans-covering for a cool $68.

The Marshmallow variant, however, may be worth the trouble if you indulge in the ganja. A cream upper with white Jazz Stripe is combined with the pot leaves Vans officially calls "palm" to maintain plausible deniability. Spending $120 just to remove the primary feature may seem ridiculous, but there's no other way to acquire the otherwise appealing sneaker underneath.

What could the cage be for? — Ostensibly, the rubber shield could offer up increased protection for the rigors of skateboarding — but anyone who wore these to a spot would be laughed away on-sight by discerning skaters. Style is an ineffable part of skating, just read this in-depth piece on pant choice if you don't believe me, and the gratuity this Sk8-Hi unfortunately bears has no place in the sport or the world at large.

Vans played itself in its bold attempt at sprucing up the iconic shoe. If you want to play yourself, too, you can scoop up the goofy kicks at retailers including Concepts and Features.