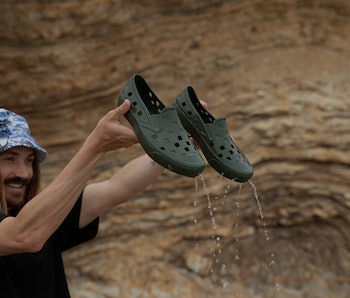 Vans has planted its flag in a new territory for footwear, as it’s launched a “rinsable” slip-on shoe made out of rubber and dotted with holes. If you’re thinking, That sounds a lot like Crocs, you are not wrong and are far from alone.

The “Trek Slip-On” quietly released last week but has now gained attention on social media for its similarities to Crocs’ now-trendy foam clogs. Depending on how you see it, Vans’ Crocs lookalike is either a revelation for the skate brand or an abomination — and even if you fall in the latter camp, you may just fall in love with it anyway.

Surfing and other beachside activities are the most obvious application for the Trek Slip-On, and it is more likely to stay secure during exercise than the shoe Crocs is best known for. In fact, Crocs has encroached on Vans’ territory with its Citilane Roka court sneaker — so you could call Vans’ move a retaliation.

Same waffle sole — Vans’ Trek Slip-On is made out of a single injected piece of rubber, including an oversized sole with the same waffle traction that’s been hugging skateboards for more than 50 years. The holes aren’t just for decoration either, as Vans touts its latest output as its first “go anywhere, do anything, rinsable slip-on.” Because of its flexible material, the Trek Slip-On can also be folded up for easy storage or transportation.

Many jokes have been made at the expense of Vans’ Crocs-lookalike, including a Wall Street Journal style writer who tweeted, “How do you did fellow fuccbois, we also make rubber clogs.” But many who’ve called the shoe ugly have also admitted they want it — a phenomenon similar to Crocs’ so-ugly-it’s-good popularity.

Get your alt-Crocs now — If you’re ironically or genuinely in love with the Vans Trek Slip-On, you can scoop up a pair now through the brand’s website or in stores across the country for a palatable $55. Color options already consist of army green, pink, blue, and black — and you can be sure Vans will roll out many more as the year goes on.

Early reviews indicate you should opt for a half-size smaller than what you usually wear. And whether it’s this pair or another, we highly recommend you embrace a sandal or one of its many offshoots for the summer days ahead. Also left for us to decide — do we call them Vrocs or Cans?