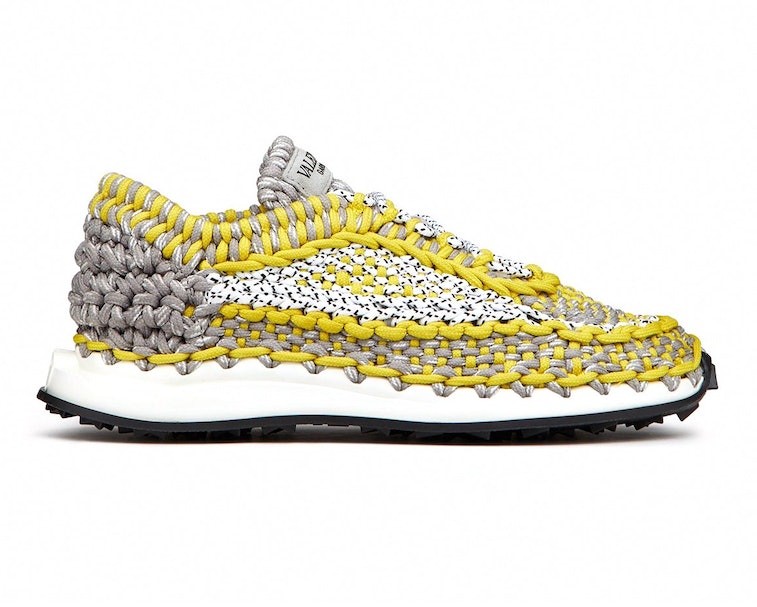 Valentino isn’t usually on our radar for sneakers, but a deviation from the standard of knit, sock-like uppers has sure grabbed our attention. The Italian luxury house has released a fully crocheted version of its Garavani sneaker that instantly dazzles the eye.

An intricate series of knots in a rounded cord comprises the upper, sort of like a more decked-out version of Keen’s crunchy Uneek sandals. Valentino says it takes more than 10 hours to construct each pair, with 88 needles and 100 meters of cord used in the process. Too often, the artisanal aspect is lacking from luxury houses these days — but that isn’t a problem with Valentino’s crotched kicks.

Knot talk — Macramè is the knot form Valentino has used, a process that’s used for projects in a wide range from friendship bracelets and plant hangers to high-end gowns. Valentino posted a short Instagram video showing how the sneakers are made, and it’s absolutely worth a watch even if you have no plans to drop nearly four figures on a shoe.

A suede label is stitched onto the crocheted tongue, atop which is a rubber Valentino Garavani logo. Down low is a jagged rubber outsole that would hold up well in mild outdoor activities — putting the Garavani at the intersection of gorp and craft.

For the sneaker’s launch, Valentino has done up the Garavani in yellow, red, gray, and black — each of which features contrast detailing.

They ain’t cheap — Here’s the part where we drop the price tag. Valentino is selling its Garavani crochet sneakers for $980 a pop. It’s a shit ton of money, but you only need to look at the knotwork to see what you’re paying for. All your favorite sneaker brands can churn out knit uppers with ease, but the crochet here is a whole different animal. Here’s hoping anyone who wears them appreciates the craftsmanship and isn’t just looking for another status symbol sneaker.