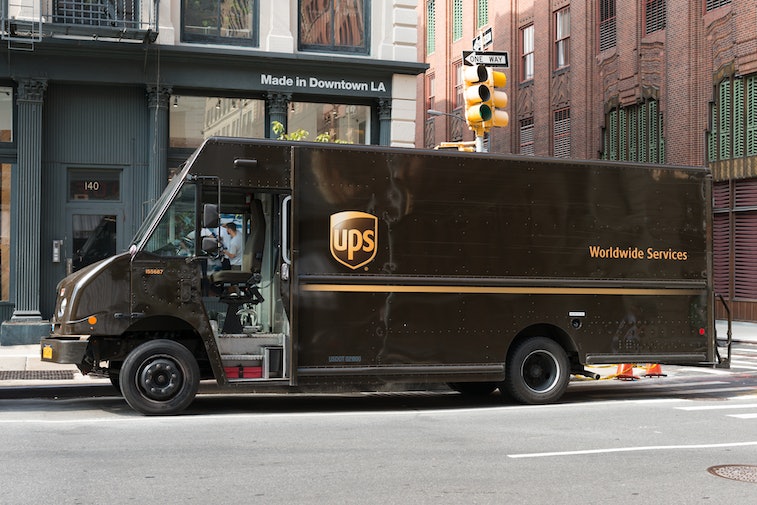 With the pandemic closing schools, offices, and real-life hangouts, people have turned to another American pastime: excessive online shopping. And that trend has become so hard to handle that UPS has now reportedly imposed shipping restrictions on large companies like Gap and Nike.

On top of the immense stress of the pandemic, the rush of Black Friday, Cyber Monday, and general holiday season traffic has overwhelmed the shipping service. And in a time where non-essential online shopping is down, the UPS is a power retailers desperately need to stay afloat and keep their customers happy. According to the Wall Street Journal, the temporary limits, which some drivers say they haven’t seen during previous holiday seasons, are a sign that UPS is metering the flow of packages into its network to preserve its performance during one of the busiest shipping weeks of the year.

Order overload — On Cyber Monday, the shipping giant notified drivers around the country to stop picking up packages from six retailers, including L.L. Bean, Hot Topic, Newegg, and Macy’s, according to an internal message viewed by the Wall Street Journal and confirmed by UPS workers in different regions. “No exceptions,” the message said.

Stores not affected by the restrictions have been hit with raised shipping prices from UPS and rival FedEx in an effort to hold merchants to volume agreements. While these may seem like total Grinch moves, e-commerce has been at a high since most people are staying home rather than shopping in-store. The UPS and other shipping services are also struggling to keep up with the demand as employees are absent due to COVID-19.

Shipping levels tend to jump the week after Thanksgiving, then slip a bit until another big increase in the week before Christmas. Both FedEx and UPS have prepared as consumers, fearful of venturing out to stores due to the virus, are stocking up on household essentials from online merchants — ahem, Amazon — at the same time the holiday shopping season kicks off.

Damage control — A UPS spokesperson told the Wall Street Journal that the shipping company also wants to maintain the network for other customers, including small and medium-size businesses and for medical shipments, including possible COVID-19 vaccine distribution. The company has hired tens of thousands of workers, invested in extra equipment, and imposed surcharges on packages all in an effort to control the surge of online shopping. Tis the season?

FedEx, on the other hand, has asked shippers to spread out promotions, including in October and November, and to process orders for pickup during the weekend to limit delays. Bigger shipping partners like Walmart, however, have continued to offer free shipping and discounts in a bid to cash in on shoppers’ holiday cheer.

Even Gap, despite Twitter company blunders, has been selling products non-stop — though I think we have Stever Kornacki and his khakis to blame for that. “Knowing the unique constraints the industry is facing this peak season, we worked with our carriers early on to collectively build a strategic plan of execution,” a Gap spokesperson told the Wall Street Journal. Similarly, a Nike spokesperson told WSJ that they expect “the majority of these orders to meet estimated delivery dates and are communicating with consumers any changes in delivery.”

Basically, if you’re doing any holiday shopping, get it done early. Though extensive measures have been taken, there’s no promise your packages will arrive on time. Abercrombie & Fitch is even telling online shoppers to place their orders by December 4 if they want items to arrive by Christmas using its standard shipping option. So finish up those wish lists, or better yet, use this as an opportunity to shop small and shop sustainably. We all know your wallet needs a break anyway.