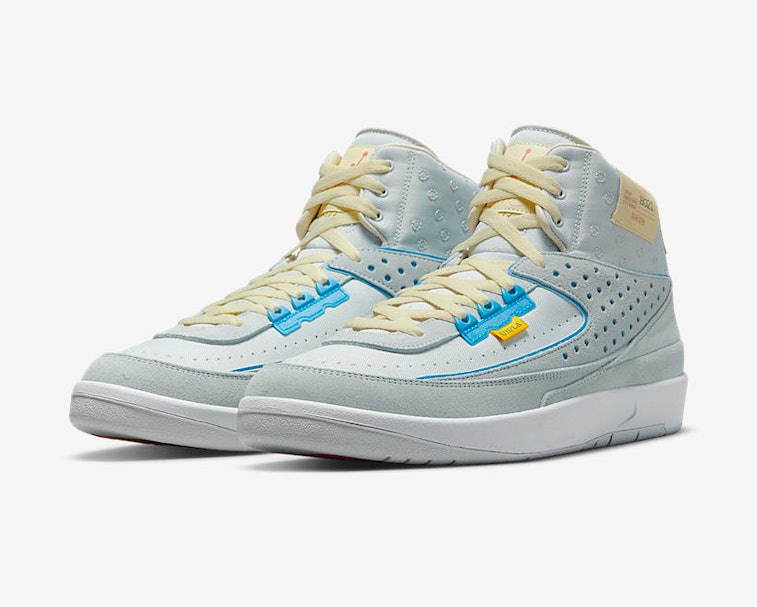 Some of the best Jordans out there have come courtesy of Union, the streetwear boutique-turned-brand. Its annual collaborations with Nike are practically a holiday for sneakerheads, and this year’s two Air Jordan 4 sneakers, inspired by outdoor gear, were no exception.

In the spirit of holiday giving, it seems Union is preparing to launch another Jordan, this time reworking the Air Jordan 2 model. While in October, a mockup of the sneaker flaunted neon orange and pink shades, official imagery shows off a clean makeup of icy blues, grays, and whites — more fitting for what may be a holiday release.

Icy — Most of the Air Jordan 2’s upper takes on a bluish-gray tone, dressing both nylon and suede panels. Canvas underlays take on a lighter shade, contrasting vibrant blue accents on the eyelets and additional underlays, while “vintage” details like yellowed laces and branding tags decorate the upper half of the shoe.

To inject its own design into the classic model, Union has added perforations across the sides of the Air Jordan 2, which transition into embroidered polka-dots on the nylon collar. Hits of bright blue peek out from the profile perforations, adding a bit more color to the pastel shoe. Retro branded tags appear at the collar and tongue, confirming the sneaker’s season as “HO21” — presumably Holiday ‘21.

Union is comin’ to town — An exact drop date has yet to be announced by Union, although the launch will likely roll out via raffle, as with the brand’s Air Jordan 4 release. The Air Jordan 2 is rumored to cost $225, and will launch on SNKRS as well as on Union’s website.

Like the rest of Union’s collaborations, a personal story will accompany its icy sneaker, bringing further meaning to the limited-edition design. This year marks the 35th anniversary of the Air Jordan 2 model, perhaps explaining why Union has infused the classic model with untraditional features alongside vintage-esque details.

Debuted in 1986, the sneaker was known for its lizard skin-style detailing — which Union has replaced with its own perforations — as well as the lack of Nike’s Swoosh. On this Air Jordan 2, other motifs are responsible in telling the shoe’s history: A Jumpman on the tongue nods to Jordan Brand, Air Jordan Wings on the collar represent the sneaker’s legacy, and “UN/LA” tags commemorate Union’s Los Angeles boutique.

Union’s collaborations speak to sneakerheads because they show a shoe isn’t just a shoe — there’s history behind the designs. If you’re lucky enough to grab a pair of these Air Jordan 2s, you’ll be able to wear the legacy.