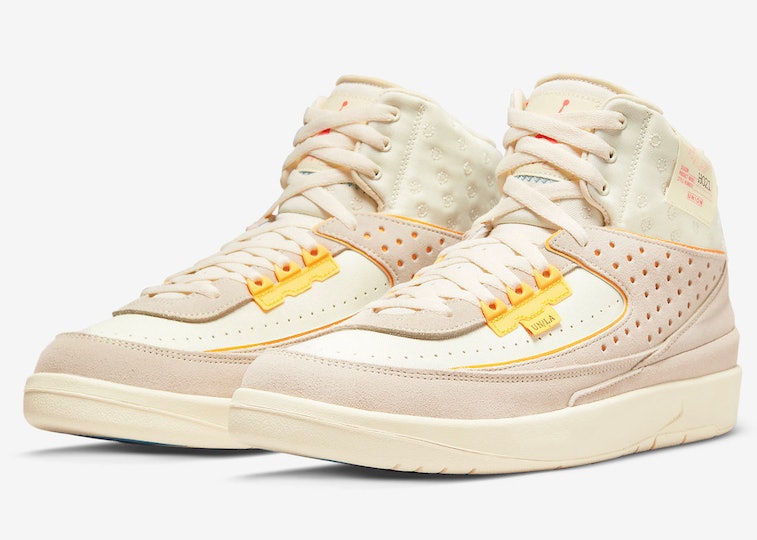 Union is settling into a comfortable relationship with Nike and Jordan Brand. A trio of “Passport Pack” Dunk Lows is near completion with the last of the sneakers releasing this month, and the Los Angeles-based boutique is already beginning to tease its next shoe collaboration.

Last year marked the 35th anniversary of the Air Jordan 2, but Union is helping to usher new takes on the silhouette into 2022. When it debuted in 1986, the sneaker stood out for its lizard-skin-like detailing and lack of a Nike Swoosh. Union has replaced the former with its own perforated texture, and further details help dig into Jordan Brand’s history.

A Jumpman on the tongue appears where the Wings logo initially had, while that mark is now moved over to the collar. Hanging off the lateral eyestays are “UN/LA” tags, a recurring motif among Union sneaker collabs.

Pretty in pink — With a soft cream and pink palette, the “Rattan” sneaker is a counterpart to the icy blue version Air Jordan 2 Union teased last year. The pastel palette isn’t where the resemblance stops, as both sneakers flaunt a mixture of suede and nylon panels, throwing in canvas underlays for good measure.

Vibrant yellow accents at the eyelets and additional underlays nod to Union’s signature branding, while yellowed laces and aged tags add a “vintage” look to the Jordan 2. Perforations across the side of the sneaker transition into embroidered polka dots on the nylon collar for a fun twist on the classic silhouette.

A pale pink shade dresses most of the “Rattan” Air Jordan 2, contrasted ever-so-slightly by cream underlays at the forefoot, collar, and tongue. Hits of bright yellow peel out from the profile perforations, adding a bit more color to the pastel shoe, while the sole unit takes on a tonal pink shade.

Retro tags appear on the tongue and collar, flaunting stylized Nike and Union branding. Like the previous Air Jordan 2, each tag declares its season as “HO21” — previously thought to mean Holiday ‘21, which is when the former AJ2 was expected to release. It’s unclear what the acronym could stand for, especially as a launch is now expected for Spring 2022.

Coming soon — Alongside the official imagery that’s leaked, Union has teased its sneakers on Instagram, showing off the pair with added graphics of animated flowers and vines. Photos and videos of pairs seeded to friends of the brand also show the Air Jordan 2 arriving in terrarium-like boxes filled with moss and flowers. Nature will surely play into the personal story behind the sneaker, bringing deeper meaning to the limited-edition design.

Union has yet to announce a release date for the “Rattan” Air Jordan 2, although a launch is already rumored for April 15. Its icy counterpart could be dropping later in the month or be limited to friends and family. Pairs are expected to retail for $225 at Union’s website and SNKRS, both of which will likely handle release via raffle. Between resellers, bots, and overall demand, you’ll be weathering a storm to get this pair of nature-inspired kicks.