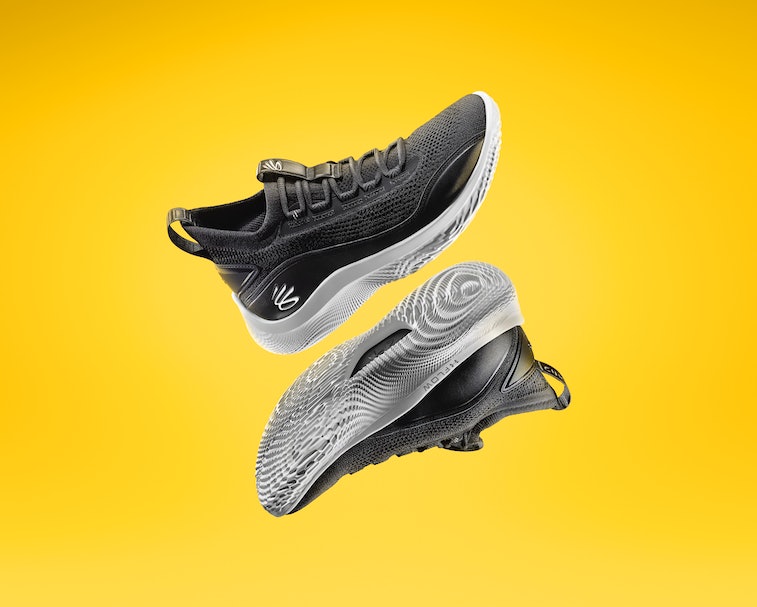 Steph Curry and Under Armour have announced the first sneaker to release under his newly launched Curry Brand. The Curry Flow 8 takes him into Michael Jordan territory, with his own logo taking place of Under Armour's. It's also being touted as the most "technically innovative" basketball sneaker yet from Under Armour, in large part thanks to the new Flow cushioning platform.

Flow eliminates the delineation between midsole and outsole by using a single "unisole" foam material to form the sneaker's platform. The soft and flexible foam is still stable enough to support Curry's game without using a separate piece of rubber as an outsole. Flow's traction is apparently so good that the sneaker doesn't squeak, a strange concept for basketball players.

"How I judge a shoe's traction has always been about the squeak," Curry said in a release. "And I used to think squeak was a good thing. The technology in Flow is crazy because it's silent, there is literally no squeak. And that's because there's no air between the shoe and the court. It's hands down the grippiest shoe I've ever worn; it's the real deal."

A shift in development — Designers of basketball sneakers usually focus on stability before integrating flexibility, but the Curry Flow 8 sees the engineering process reversed. Under Armour says the underfoot feeling will feel "unique" at first but that it won't take too long to get used to.

"When we saw how sticky this material was on hardwood, we knew this was going to be groundbreaking," said Fred Dojan, Under Armour innovation’s VP of footwear development. "I’ve proudly spent 20+ years working in product innovation creating the best technology available for athletes. This is the most excited I’ve been about the opportunity and potential of new technology in a very long time."

Not much is said about the upper — With so much focus on the new Flow cushioning, Under Armour hasn't said much about the upper. What we do know is that it's constructed of two parts designed to work "dynamically and independently." Along with the new sole, the upper is designed to enable cutting motions and hard stops that help define Curry's game.

Under Armour will hope the new technology, but more importantly Curry's name and stature, will lead to Curry Brand being more competitive with Nike and Jordan Brand. The new offshoot will also include apparel and accessories, all baring Steph's new Kokopelli-esque logo.

Taking on Jordan is still a gargantuan task, and it'll begin when the Curry Flow 8 releases December 11. You'll be able to find it pretty much wherever basketball kicks are sold, for a price of $160.