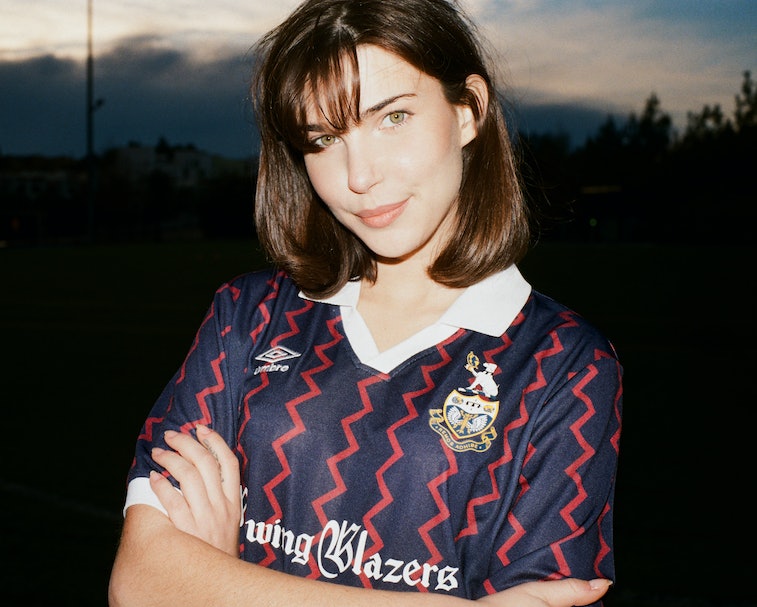 Whether you call them soccer jerseys or football shirts, we can all agree that the sports uniforms have never looked better than they did in the ’90s. Wild patterns and oversized fits were all the craze, and Umbro played a huge role as the outfitter for Manchester United, Ajax, and England’s national team.

Nike and Adidas may dominate the landscape today, but Rowing Blazers is helping to run it back to when the diamond logo reigned supreme. A new collaboration between the two brands, put together by Footlocker’s Greenhouse incubator, sees a range of jerseys decked out with classically prep patterns.

Gun club check, tartan, croquet stripes, and a red-and-blue zigzag all appear on full kits of collared jerseys and shorts. Rowing Blazers takes place of the typical sponsor logo, while the coat of arms granted personally to RB founder Jack Carlson by the United Kingdom’s College of Arms. Jerseys are a no-go in formal settings, but you may just get be able to get away with it because of these dandy prints.

Wild by any standard — Soccer jerseys may have been insane in the ’90s, but the zigzag shirt is the only one that looks like it could have been worn by a team in any era. The three other prints, though — it’s hard to imagine any team would have the gall to bring country club classics to the pitch. In this context, the stripes of the elite actually become subversive.

The coat of arms gives Carlson a chance to put a personal touch to the collaboration, as it features references to his studies in archeology, his time on the U.S. National Rowing Team, and an image of his childhood dog, Lisa. Carlson designed it himself while working for the College of Arms, but it had to be approved by the Heralds and King of Arms of England. Its placement on the jerseys marks the first time Carlson has ever used it on any Rowing Blazers apparel.

“It’s like when you’re a kid and you’re assigned to design your own coat of arms,” Carlson says. “But this was for real. It was granted by the British government.”

Working with Umbro carries more significance for Carlson, who spent summers in England as a child wearing the country’s Umbro jersey. “Working with Umbro makes it feel more real than, like making a fashion soccer jersey,” he says.

Plenty of chances to cop — The collaborative capsule, which is completed by matching field jackets and a croquet stripe soccer ball, will first launch through Rowing Blazers’ website and the Greenhouse app this Friday, March 26. A wider release will then follow through Footlocker’s website and select stores on April 2. Pricing ranges from $80 to $250.

Thanks to the timing, you’ll have ample opportunity to find out where exactly you can get away with wearing a soccer jersey this spring and summer.