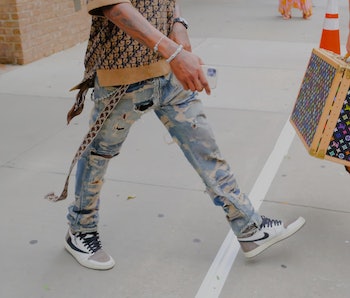 Fragment Design founder Hiroshi Fujiwara has already confirmed rumors of impending Travis Scott x Nike Air Jordan 1 Low sneakers, donning a pair of the unreleased shoes himself. Yet even more collaborative pairs are on the way — and this time, they were teased on the feet of the tiniest Travis Scott fan.

The rapper’s daughter Stormi wore a light brown iteration of Nike’s Air Jordan 1 Low in September, flaunting a reverse Swoosh verifying Scott’s involvement. At the time, the kicks were thought to be a custom pair for one of the world’s smallest sneakerheads — but new imagery suggests the sneakers have been put into production.

Switching it up — With white leather overlays contrasting a light brown suede base, the sneaker’s color scheme seems to nod to Scott’s first Air Jordan 1 High OG collab — dubbed “Mocha” — although the upcoming pair is rumored to simply go by “Reverse.” Unlike the high-top shoe, there are no black accents; instead, the rapper’s reverse Swoosh is dressed up in cream to match its midsole. Dark brown dresses the nylon tongue and outsole.

Scott’s “Reverse” Air Jordan 1 Low plays into his ongoing theme of “reversing” his past shoe designs — or at least, mixing up its colors to create a “new” sneaker. Travis’ next collaboration with Fragment Design and Nike, which features a white upper with blue Swooshes, nicely complements their prior co-branded sneaker composed of the same colors.

Alongside the “Reverse” and Fragment Design Air Jordan 1 Lows, Scott is expected to release a third iteration of the sneaker in 2022. No color scheme has been announced, but we can only assume its design follows the same “reversing” theme the rapper has been utilizing. Let’s hope Scott takes inspiration from some of his printed sneakers — like his 2020 paisley Dunks — rather than just color blocking.

Overkill — Still, just the mention of another Scott and Nike partnership is enough to send hypebeasts into a frenzy. People can’t seem to get enough of the rapper’s exclusive sneakers — and accordingly, the rapper and Nike are pumping out shoes at a relentless pace.

Scott has 12 unreleased Nike sneakers planned for the upcoming months: Five upcoming Air Max 1s, a retro Air Trainer 1 Mid, and an Air Jordan 1 covered in animal print are expected by the end of this year. Yet his fans are insatiable — and when his Air Jordan 1 Low shoes eventually drop, people will undoubtedly flock to SNKRS and resale sites for a pair.