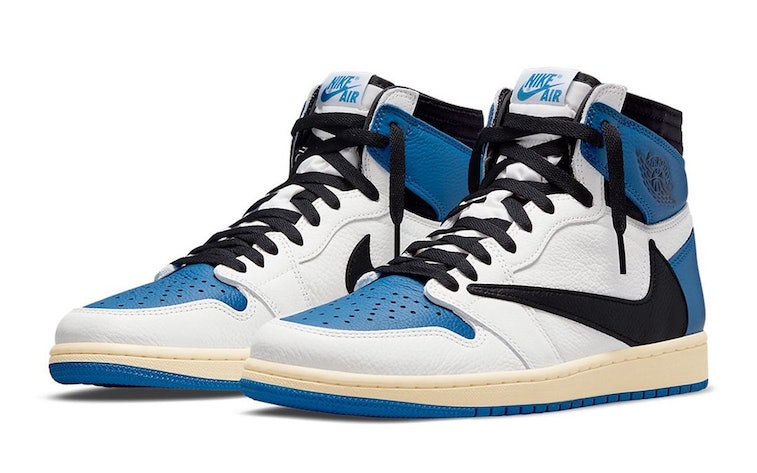 Travis Scott’s next Nike collaboration may be his most hyped yet, thanks to the addition of Fragment Design. Various leaks of the Air Jordan 1 High — including pictures of Scott wearing the shoe himself — have circulated since February, though official imagery from Nike suggests the sneaker may be dropping as soon as this month.

La Flame was first seen wearing the Air Jordan 1 High shortly after Valentine’s Day, when he hung out with Kylie Jenner and their daughter Stormi (who likely own matching pairs). With a white base, blue overlays, and black accents, the sneaker resembled the Fragment Design x Air Jordan 1 from 2014 — though its backward Swoosh aligned the design with Scott.

Big-ticket branding — Dubbed “Military Blue,” the triple collaboration makes itself known with tasteful branding (Scott’s reverse Swoosh aside). On the left sneaker’s heel, a Cactus Jack head has been embroidered, while the right sneaker’s heel sees Fragment Design’s signature lightning bolt logo sewn into the blue leather. Nike Air branding sits atop the tongue as usual as a black Fragment Design banner lines its side.

The hyped Air Jordan 1 High also features pre-yellowed midsoles to help its wearer achieve a cool, laidback look despite the hundreds of dollars spent on the sneaker. It really gives new meaning to “filthy rich” — especially once resale prices are involved. Already, the shoe is listed on reselling sites like StockX for over $83k.

Based on a loaded product page on Travis Scott’s online shop, there’s speculation that an early draw or raffle for the “Military Blue” Air Jordan 1 will launch soon; A SNKRS release is even rumored for July 29. The collaborative sneakers are expected to retail for $200, should you be able to get a pair in the first place.

More to come? — And while there hasn’t been news of an official launch, a low version of the “Military Blue” Air Jordan 1 exists — we’ve seen it on Scott himself. The rapper was spotted donning the shoe, which features similar color blocking and a white backward Swoosh, in January.

As a notorious Nike collaborator, Scott could have commissioned the unreleased sneaker as a family and friends only pair or one-off sample. But his cryptic clues on Instagram — including photos of Kevin Durant and Kyrie Irving sporting his previous “Mocha” Jordan 1 alongside some “shushing” emojis — implied Scott has something up his sleeve — or perhaps, pant leg? We’re literally waiting for the other shoe to drop.