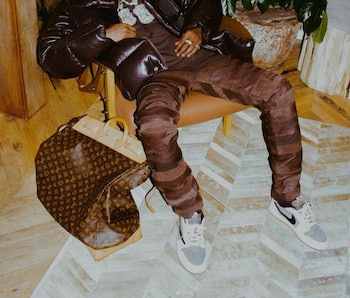 After seeing Travis Scott’s upcoming Air Jordan 1 Low on everyone but the rapper, Scott has finally given us an official look at the sneaker on Instagram. Teased in a new color scheme of white, gray, and brown, the reverse Swoosh shoe is one of several set to drop early next year.

While there’s been no confirmation that this latest iteration is actually scheduled for mass production, we know that Scott has at least three Air Jordan 1 Lows prepped for next year, and that he likes to debut his collaborative kicks on social media. Already, fans are expecting a “Reverse Mocha” version of the sneaker from the rapper, and the dark brown Swooshes on this model fit into Scott’s love for brown palettes — remember his all-brown Batman costume?

What’s coming — Still, the new sneakers are dominated by white and gray shades, with the former dressing the overlays and midsoles. Gray underlays seem to be made of suede, adding a bit more luxury to the shoes than previous iterations. Of course, the most notable detail is Scott’s signature reverse Swoosh, done up in dark brown, accompanied by red Nike Air branding.

The upcoming pair will join a “Reverse Mocha” pair initially teased by Scott’s daughter Stormi. With white leather overlays contrasting a light brown suede base, the sneaker’s color scheme seems to nod to Scott’s first Air Jordan 1 High OG collab — dubbed “Mocha” — although the upcoming pair is rumored to simply go by “Reverse.” Unlike the high-top shoe, there are no black accents; instead, the rapper’s reverse Swoosh is dressed up in cream to match its midsole. Dark brown dresses the nylon tongue and outsole.

While the white, gray, and brown makeup of the latest Air Jordan 1 Low doesn’t seem to reference one of Scott’s previous releases, it’s possible its colors are inspired by one of the rapper’s upcoming sneakers with Nike. Scott has five Air Max 1 shoes arranged to release this holiday season; two of which feature similar shades as Travis’ new kicks. Of course, Scott also has seven other unreleased collaborations — any of which could look like his forthcoming Air Jordan 1 Lows.

Another preview soon? — With a trio of the models expected — and Travis and Stormi teasing two of the iterations — we can only hope Kylie debuts the third soon. While the three Air Jordan 1 Lows aren’t set to arrive until early 2022, it’s best to keep tabs on the collaborative sneakers; there’s a reason they’ve become Nike’s fastest-selling and most desired kicks.