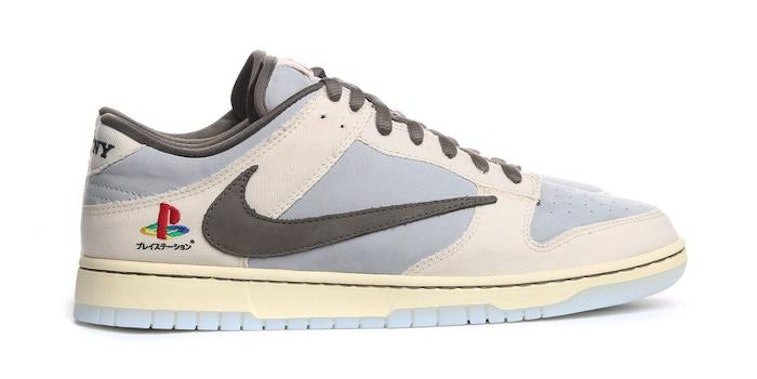 If you’ve seen the highly inflated resale market for the PlayStation 5 and had hoped for an adjacent product that was even more difficult to obtain, your self-defeating mindset has been rewarded.

Travis Scott is releasing just five pairs of a Nike Dunk Low made in collaboration with PlayStation. To secure one, you’ll have to enter a raffle on the Cactus Jack website and win the fuccboi lottery. Should you prevail, you’ll have on your hands a cream, grey, and brown Dunk with Japanese branding and the backwards Swoosh that’s become signature to the rapper’s sneakers. It’s listed as “not for resale,” which is a hilarious denial of the inevitability of someone trying to sell the PS5 Dunk for, like, $30,000.

There’s something else for the unchosen masses — The Nike SNKRS app is already a reliable enough source of frustration, so don’t get your hopes up on landing a pair of these extremely rare kicks. There’s still plenty of goods to be had, though, with a wide range of products to rival Scott’s McDonald’s collab in quantity.

The standard fare of co-branded T-shirts and hoodies is accounted for, and once again Scott is selling some laughably novel products. A “Do Not Disturb” sign for your gaming hours can be had for $25, and you can play on a Cactus Jack beanbag for $150. There’s also a neon sign to be had for $300, which will help you complete the “Travis Scott saved my life” man-child cave of your dreams.

Most expensive of all is co-branded varsity jacket at a whopping $800. What all of these goods have in common, besides signaling to onlookers that Scott is your avatar, is that it bookends the unofficial PlayStation merch from earlier this year.