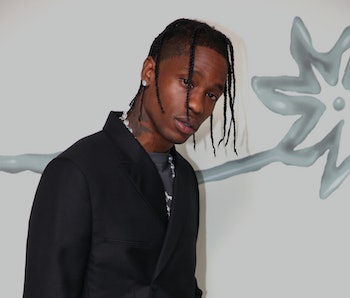 As we wait for updates on Travis Scott’s upcoming Air Max 1 sneaker, different iterations of the project are beginning to surface, thanks to the rapper himself. Scott was spotted around New York City wearing his Air Max 1 — distinguishable by its fabric straps and reverse Swoosh — in a bright yellow color scheme.

The sneaker is one of five Air Max 1s expected from La Flame come this holiday season, but it may be the most covetable. Among the brown, black, lavender, and light gray versions of the modified Air Max 1, the yellow nods to a previous Scott x Nike collaboration: In 2019, the rapper created a yellow variation of the Air Jordan 6 that was never released despite hypebeasts’ pleas. Two years later, sneakerheads are finally getting a chance at scoring a similar yellow makeup, complete with backward Swoosh.

Made for hiking and toting Hermès — First teased on SNKRS in March, we know the Scott’s newest collaborative sneaker is inspired by the desert and trending workwear designs, taking on a boot-like look reminiscent of Nike’s own utilitarian ACG line. A clip of Scott wearing the model while working out on an exercise bike only furthers the idea that these shoes aren’t meant for a hypebeast’s shelf — instead, they’re built for performance.

Recent paparazzi pictures show Scott demonstrating this notion again by holding a huge Hermès Haut à courroies bag beside his yellow sneakers. The oversized purse, which is referred to as Hermès’s “firstborn” and sells for $23,000 on the resale market, certainly must have required some skill to carry: Good thing Travis wore his rugged Air Max 1s.

Once you’re able to take your eyes off the bag, feast your eyes on Scott’s newest sneakers. The latest look reveals a tonal yellow and tan color upper which boasts his signature enlarged Swoosh backward on the midfoot done up in a tan snakeskin material. And much like the brown iteration we saw earlier, the yellow Air Max 1 sports “Cactus” Jack branding flags at its heel with trail-style webbing elements.

More to come — With a holiday release expected, we’re only waiting for Scott to give us more glimpses at the other versions of his Air Max 1. After all, paparazzi shots may be the closest we ever get to see the sneaker considering demand for the shoe has been building since March. Can Stormi send us her pair?