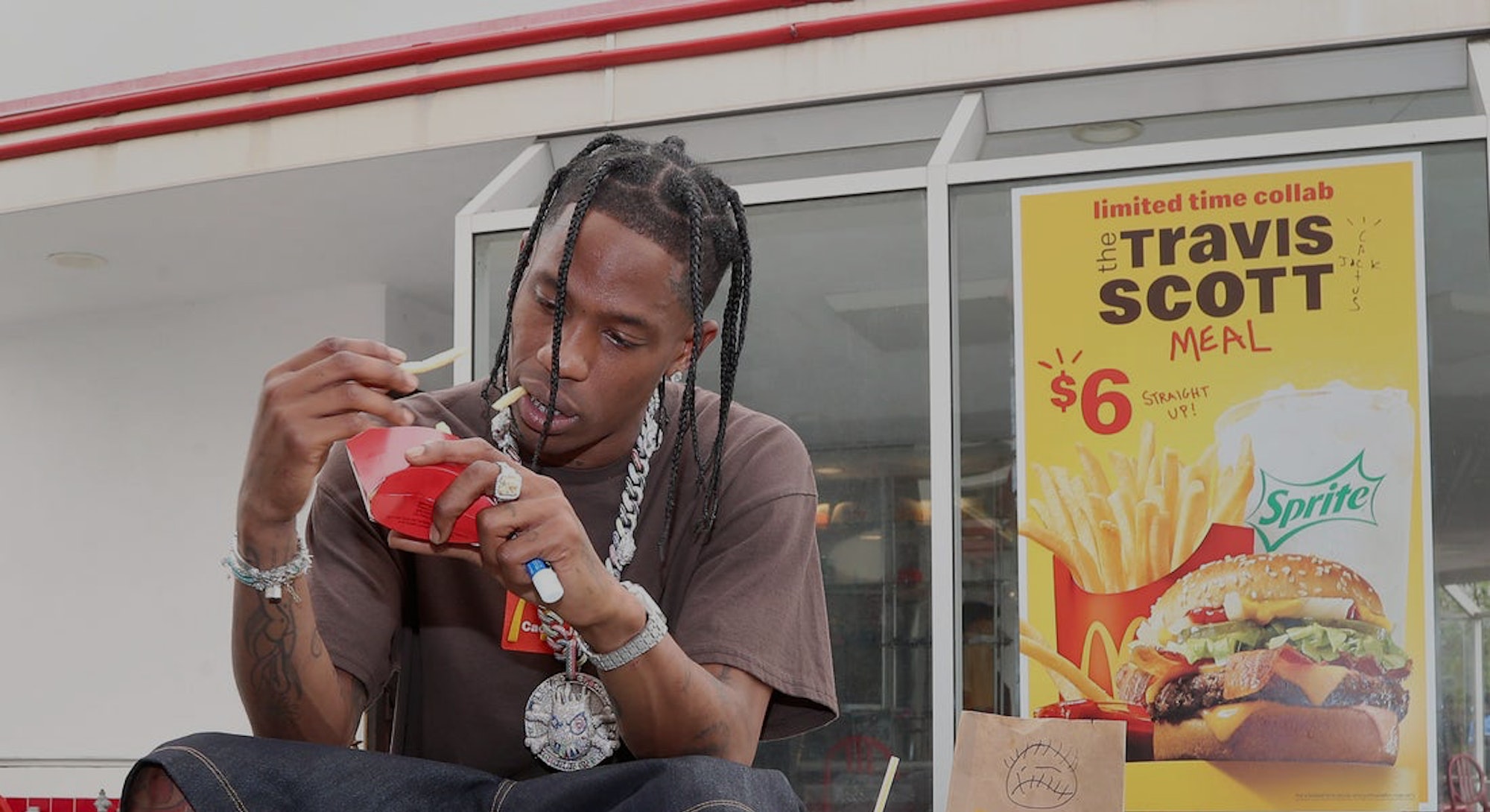 No one in hip-hop is better at leveraging their personal brand outside of music than Travis Scott.

Having already become the genre's foremost collaborator, he seems to be taking the same approach to merchandising. This year alone, he’s released product with the Houston Rockets, Hot Wheels, Fortnite, Nerf, Nike, and LeBron James’ brand Uninterutpted. But none of those partnerships are on the same scale as his latest, with perhaps the most recognizable fast-food brand in the world: McDonald’s.

The mighty empire essentially rebranded the Quarter Pounder Meal, adding lettuce and bacon and a side of BBQ sauce with Sprite to drink, as the Travis Scott Meal. If the marketing is to be believed, this is Scott’s go-to order. Much to the dismay of many fans, the combo was all that was available in restaurants. No special packaging, no added toy, just a specific Quarter Pounder order with a $4 discount.

Those hoping for something more permanent were obliged a day after the Travis Scott had been added to the menu, when the rapper’s online shop was updated with nearly 100 co-branded products with McDonald’s. The wide-range of merchandise included a standard if not abundant range of apparel, as well as eyebrow-raising pieces including denim with the Golden Arches, a chicken nugget body pillow, and perhaps most audaciously, a limited edition Happy Meal box labeled as a “clutch.”

To some onlookers, such a partnership may have come as a surprise. Enlisting Travis Scott makes sense for McDonald’s, which, as shown by a decade’s worth of headlines, has had a major issue with winning over millennials. (Never mind that Scott’s target demo now seems to be Gen Z’s age range range of 15 to 21). But besides a likely massive check signed by Ronald McDonald, how does fast food make sense for Travis Scott?

Searching for a deeper connection is pointless because there is nothing deeper to Travis Scott. His only discernible worldview is in the products he likes, which he can then slap his name onto and sell to a young and rabid fanbase. He loves Air Jordans so he made his own. He’s apparently a gamer — or has realized there’s a lucrative intersection to be found — and held a concert inside Fortnite with apparel to commemorate it. And now he’s revealed his favorite McDonald’s order, which has become the center of a nationwide campaign.

What’s baffling about the rise of Scott as one of the two or three hottest rappers in the game is his utter lack of personality. He doesn’t have the bravado or seduction of Drake, the introspection of Kendrick Lamar, the playfulness of Lil Uzi Vert, the (let’s say) boldness of Kanye West, or the menace of DaBaby — them being the some of the few rappers in the same vein as Scott over the past five years. If you had to describe Travis Scott in one word, it’d likely be “rager” — a moniker for a hard partier that had already been claimed by Kid Cudi and that is all but devoid of meaning.

The same shallowness can be attributed to “it’s lit” and “straight up,” two Scott ad-libs that have been co-opted for the McDonald’s campaign. Seeing “Sprite with ice. Straight up” on a McDonald’s campaign should be a strange sight, but it doesn’t feel any more forced than the idea of Travis Scott as a superstar. If fans will fall for his categorization as an elite musician, why not as a top-tier pitchman as well?

As an artist, Scottshares more in common with pop stars than he does rappers, which does nothing to disway the “industry plant” label that’s been attached to his name throughout his career. Suddenly, without any visible buildup, Scott was an artist to pay attention to and one backed by Kanye West, T.I., and veteran producer Mike Dean. It was if he emerged from a lab ready to become the next “big thing,” more expected than earned.

To listen to his music is to gleam nothing of him as a person. His songs form atmospheres, mere moods to scream “it’s lit” to, and he’s often the least essential voice on the record. Of his 18 singles to appear on the Hot 100, only two of them have been solo ventures. Top among the rest are “Pick Up the Phone,” “Goosebumps,” and “Sicko Mode” — all of which are more memorable for Young Thug and Quavo, Kendrick Lamar, and Drake, respectively.

The closest thing Scott has made to a personal record is “Coffee Bean,” which closed out his most recent album Astroworld. Outlining his failed relationship with Kylie Jenner, the closet he comes to disclosure is with the line “Your family said I’m a bad dude/Plus I’m already a black dude.” It was a rare moment of introspection for Scott, but if it were anyone else you’d expect them to go more in-depth. That’s just not who he is, and so a feeble remark stands out as introspective compared to how little else he’s revealed.

Travis Scott is best seen as a curator, and an excellent one at that, taking the Kanye West approach to aggregating talent and making himself the most dispensable component of the final product. It’s been a remarkably successful methodology, and it’s the reason he can lend his name to so many profitable product collaborations. Nike and McDonald’s aren’t on the hunt for bubbling talent — they want established stars guaranteed to bring a following.

But buying into these products is an act of cognitive dissonance. If Scott is the puppet master, what are these companies selling when it’s his name alone and there’s nothing attached to his strings? Much like the musicians he works with, the products he’s released have become a part of his amorphous identity.

In a perfect world (which we all know doesn't exist), Scott would use his gargantuan platform to try to create something meaningful — such as voter registration, which Frank Ocean used merchandise to encourage two years ago in Scott’s hometown of Houston. But even expecting Scott to respect the seriousness of the pandemic is too much to ask for, as seen by his unmasked McDonald’s appearance to a swarm of young fans.

Searching for the bigger picture behind a product is too much to ask for from many consumers, which is why the McDonald’s x Cactus Jack merch is probably best looked at for the kids. Kids don’t need a cohesive narrative to encourage their purchasing. They’ll eat up what Travis Scott feeds them, and whether it’s good or bad is irrelevant. All they need is a T-shirt to put on so they can say, “It’s lit.”