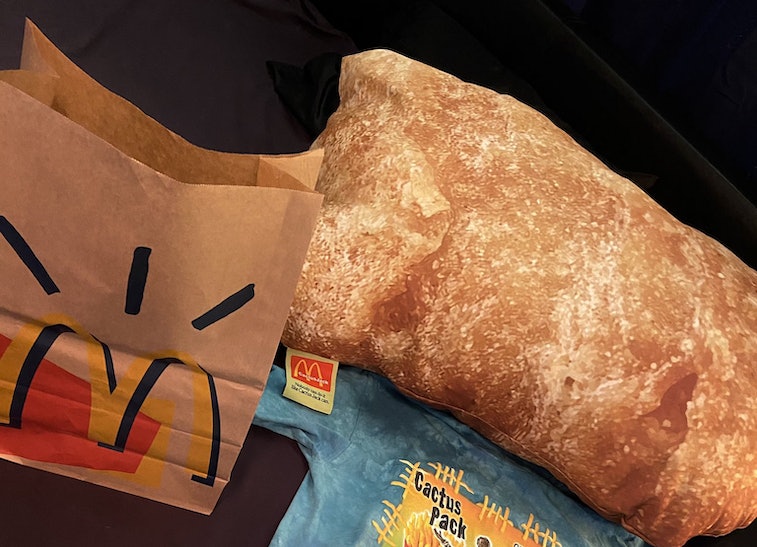 The Travis Scott x McDonald's Chicken Nugget pillow is the story that keeps on giving. Released with nearly 100 other products last summer to commemorate the "Cactus Jack $6 meal," the gigantic and uncanny pillow became a meme and the primary symbol for the absurdity of the collaboration. Who in the world would spend $90 for a three-foot, crusty-looking pillow that would take months to deliver?

Earlier this month, the pillows began arriving — and the initial reviews weren't great. Photos of the item in-hand showed the resemblance to a McDonald's staple wasn't exact enough. It's as if customers were duped by the hype for the corporate collision of Travis Scott and a fast food conglomerate. But then we found someone who wasn't so upset with their purchase after all.

Twitter user @Koindrick_Lamar, who we've learned to be a 31-year-old man from Southern California, initially tweeted that his pillow didn't look so bad and "this shit huge." We just had to talk to him to learn more about life with a Chicken Nugget pillow, and what follows is a brief Q&A with a buyer showing no signs of remorse. @Koindrick_Lamar asked us to keep his real name private, so we'll refer to him by his Twitter moniker.

This interview has been lightly edited for brevity and clarity.

Input: Let's just jump into things. Why did you buy the Chicken Nugget pillow?

@Koindrick_Lamar: I thought it was a pretty cool collab. I'm a fan of Travis Scott, and I bought some of his other merchandise in the past, too. I saw the pillow and I was like, "God, no way." I got some other shit from the site, too, a T-shirt, some socks — but the pillow was the big draw. He's made some kind of out-there merchandise. It was $100, which wasn't too terrible.

Are you satisfied with it now that you have it?

Yeah, I was pretty shocked at the size of the pillow. I read the description and the dimensions of it, but it showed up in a four-foot tall box. I was like, "What is this?" because the thing with Travis merch is it takes some time. I bought the Fortnite figures from his other collab, and the pillow took longer.

I know it got a lot of hate online, but you can't actually make a chicken nugget. You know it's not gonna be — maybe they could have done it better with a smaller pillow. But this thing is massive, and I think it's pretty good.

“Sometimes I'll use it when I'm sitting up and watching TV. I use it as a back pillow.”

It's made out of a canvas material, kind of like a Jansport backpack, so kind of rough. It's really durable, so I'd prefer that to something that can tear easy or deteriorate over time. It's easy to wash. When you press on it, it doesn't lose its shape. It's pretty well-manufactured in the stitching. There aren't any loose seams or glue sticking out.

How do you use it?

I have it on my couch. It's really big, so it would take up a lot of my bed space. Sometimes I'll use it when I'm sitting up and watching TV. I use it as a back pillow.

Later on, once COVID is over and I have more people are over, it'll be a good conversation piece. You'll see it first thing and be like, "What the heck is that? Like what, that's nuts?"

Did you get the Cactus Jack meal?

Oh yeah. I tried it out. It's not bad. It's pretty much just a Quarter-Pounder, no big deal with the barbecue sauce. But it was pretty cool, the hype kinda — I got the shirt too.

I get compliments on it. Some people weren't aware of the merch, they just saw the meal advertisement. So they're like, "Did you get that at McDonald's?" I say, "No, I got it through [Travis'] website." It's a conversation starter.

“This thing is massive, and I think it's pretty good.”

So you're a pretty big fan of the collab overall?

A lot of hip-hop artists have done collabs like this in the past with other brands. I'm really big into streetwear and stuff like that. You know, you have your Jordan and Supreme working with everybody. So I think it's cool that rappers are getting into it, too.

Drake has his collaborations, and I think it's good to have your own merchandise. Kanye with his Yeezy brand, it shows hip-hop artists can do things a little off-pace and have an input in the fashion world.